#Review - Night of the Dragon by Julie Kagawa #YA #Fantasy #Paranormal 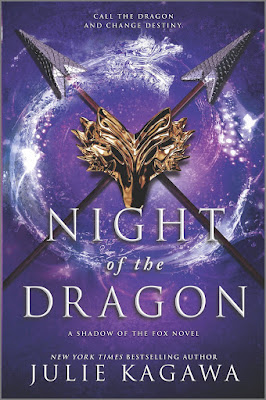 The incredibly epic and shocking conclusion to the Shadow of the Fox trilogy holds back nothing! No one is safe in New York Times bestselling author Julie Kagawa's final journey into the Japanese mythology inspired Empire of Iwagoto, in a series perfect for fans of Leigh Bardugo, Julie C. Dao and Natasha Ngan.


Kitsune shapeshifter Yumeko has given up the final piece of the Scroll of a Thousand Prayers, placing it in the hands of Genno, the Master of Demons, in order to save everyone she loves from imminent death. Now she and her ragtag band of companions must journey to the wild sea cliffs of Iwagoto in a desperate last-chance effort to stop him from calling upon the Great Kami dragon and making the wish that will plunge the empire into destruction and darkness.


Shadow clan assassin Kage Tatsumi has regained control of his body and agreed to a true deal with the devil--the demon inside him, Hakaimono. They will share his body and work with Yumeko and their companions to stop Genno and ultimately separate Hakaimono from Tatsumi and the cursed sword that had trapped the demon for nearly a millennium.


But even with their combined skills and powers, this most unlikely team of heroes knows the forces of Evil may be impossible to overcome.And there is another player in the battle for the scroll, a player who has been watching, waiting for the right moment to pull strings that no one ever realized existed...until now.

Night of the Dragon is the third and final installment in author Julie Kagawa's Shadow of the Fox trilogy. This book picks up right where Soul of the Sword ended. The book actually features several narratives including Yumeko, Kage Tasumi, and Suki the ghost girl who has been hanging around with a Key player in the game, Lord Seigetsu. The game is balancing on an edge waiting for someone to make a costly mistake that could destroy the entire world. Even though Genno, Master of the Demons, has all (3) pieces of the Dragon Scroll, hope has not been lost.

After all, Yumeko has proved herself time and time again, and her allies, Reika, Taiyo Daisuke, Hino Okamo and Kage Tatsumi would follow her to the end of the earth if she asked. If Yumeko and her band of unlikely heroes can’t stop Genno in time, he will summon the Great Kami Dragon, make his wish, and plunge the world into chaos and darkness. Yumeko has definitely gotten stronger since she left her temple. Both in her fox powers, and as a person.

She's determined to save the world no matter the cost to herself. Despite all that she has gone thru and suffers here, she still remains pure and unselfish. Yumeko's journey is one of enlightenment as well. One could say that Yumeko's journey returns to where it began by traveling to meet the Moon Clan and its leader on the Island of Ushima. It is here where Yumeko learns about her heritage. It is here where Yumeko must make a final stand against Genno and the hoards of hell eagerly flooding the Island in hopes of complete chaos and destruction.

Meanwhile, former-Shadow clan assassin Kage Tatsumi has regained control of his body and agreed to a true deal with the devil — the demon inside him, Hakaimono, thanks in large part to Yumeko. They will share his body and work with Yumeko and their companions to stop Genno. Hakaimono is still dangerous and can't truly be trusted, but his strength gives Tatsumi an edge when it comes. The pair soon find out their combined power and skills may not be enough to help Yumeko overcome what's ahead. Especially when the group discover there's been a shadowy figure following their every move, and he has his own plans in store.

With all the pieces of the game all making their way to Ushima, it will be a matter of ultimate survival or ultimate sacrifice for our heroes and heroines. Suki is one of those pieces. Suki has always been an outside character who fell into a bad place thanks to evil machinations and now can only look on while someone she loves puts himself at death's gate. Suki is actually used to help Yumeko in this book which was fine with me. Yumeko and her allies could use every little assistance they gain gather. Because of who she is with, Lord Seigetsu, her part in this book has never been more important and crucial to Yumeko's survival.

A variety of new demons are introduced, from smaller yōkai such as the fire wheel Wanyūdō to the much larger sea priest Umibōzu. I found myself flipping back and forth between the glossary at the end of the book just to keep myself fully immersed in the story and its characters. Fair warning gentle readers, the author holds absolutely nothing back. The final battle was action packed and very emotional. Far too often I am left disappointed when the last fight is so anti-climatic that it was almost boring and it was less than epic. Not the case in this book. The Shadow of the Fox trilogy was inspired by the authors love for and knowledge of the myths and legends of Japan and is set in a fully imagined Japanese-fantasy world.