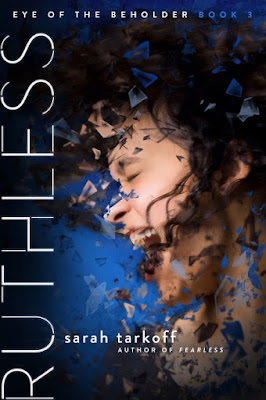 A brave young woman risks everything to expose a conspiracy controlling her world in this heart-pounding finale to the Eye of the Beholder series, a thrilling sag set in a near-future dystopian society.

Grace Luther grew up believing in the Revelations: the moment when Great Spirit “saved” humanity and transformed the world into a place where pious behavior is rewarded with beauty, and wrongdoing results in ugliness and even death. But at eighteen she learned the truth: the Revelations were a lie meant to manipulate and suppress her society.

Joining the resistance, Grace heroically struck a major blow against the government of the prophets. Now many in the rebellion believe that “Prophet Grace,” is the champion who will lead them to final victory. Grace isn’t so sure. The battle has cost too many lives—including those closest to her. Devastated by all she has seen and endured, she fears she cannot command anyone—much less an entire movement.

As the government’s reign of terror intensifies, rebel after rebel is targeted and killed. Yet there is one last hope. With the future at stake, Grace must overcome her fears to expose and destroy the government’s false prophets forever. Though she has many doubts, there’s one thing she’s certain of: she will lead the rebellion to victory . . . or die trying.

Prophet is the third and final installment in author Sarah Tarkoff's Eye of the Beholder trilogy. This story picks up right where Restless left off. 10 years ago, a world wide phenomena called the Revelation, united the entire world under one Universal Theology. So called Prophets rose to prominence. Almost everyone believed that those like Joshua are a direct mouthpiece of the Great Spirit. Thanks to a network of tiny nanobots in everyone's brains, there have been no wars or large scale conflicts for 10 years.

But, since she went undercover to expose the hypocrisy of the Prophets, especially Joshua, Grace has pushed the boundaries and decided to go to war against the Prophets expose them for their hypocrisy. After naming herself Prophet Grace and escaping from South Africa, Grace and her friends end up in Brazil. Grace has a few loyal friends still alongside, including Dawn who is the overall leader of the rebellion. But, plenty of enemies including one who was supposed to be dead; her own mother, are eager to see Grace fail spectacularly.
The battle will be costly. Lives, including those closest to her, may fall. After so much devastation and loss, how can Grace survive against all odds? Grace must overcome her fears to expose and destroy the false prophets forever and if her mother gets in the way, she goes down as well. Plus, Grace has to choose who she trusts. Can she trust Zack who claims to be a double agent? Or, how about Jude who she holds her heart? The ending left me puzzled for reasons I can't spoil. Grace has pushed and shoved and knocked down and treated like crap but when all is said and done, does it really matter what she tried to do?
This book, as with the previous installments, is written into a bunch of minor books. Kind of like episodes of a series. Which shouldn't be surprising since the author has been writing for TV series.