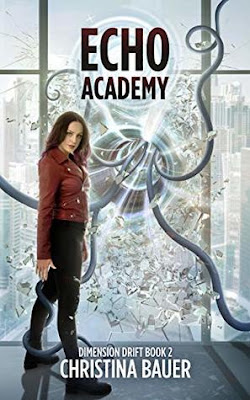 A Prince Of No Value

On planet Umbra, Thorne is known as the weak prince, extra brother and human-shaped punching bag for his father, Cole, Emperor of the Omniverse. Thorne never expected to find his transcendent soul mate. But when the prince connects with Meimi Archer, the human girl becomes Thorne’s transcendent and his world…

…until Cole decides to abduct her.

Now the prince of no value will do anything to protect what’s most precious. Meimi.

A Girl Geek With A Problem

Science prodigy Meimi Archer attends ECHO Academy, an elite high school located under Earth’s Boston Dome. That part is cool. Then she finds herself separated from her boyfriend, Thorne, due to a supposedly unbreakable exile void. Not okay.

Meimi pulls together a band of classmates and misfits. Her goal? Break through the exile void. Her problem? Headmaster Conway, the man who runs ECHO Academy. Conway wants to use Meimi’s exile void annihilator for an invasion of Umbra. Meh. Meimi’s not worried--she’ll take the Headmaster down while still reuniting with Thorne, easy peasy. Only trouble is, who’s that shadowy figure following Meimi everywhere? And why does it feel like Umbra may actually be invading Earth somehow?

In ECHO Academy, secrets are revealed, plots uncovered, and transcendence is only a few pages away. Don’t miss this jam-packed adventure of 40,000+ words.

ECHO Academy is the second (actually 4th) installment in author Christina Bauer's Dimension Drift. Things you should know. First, there are two prequels called Scythe and Umbra. Scythe is the story of Meimi Archer one of the most intelligent young scientists in this world who created something that led to being discovered by the wrong people. Umbra follows the second main character, Thorne, who is from Umbra an Omniverse where his father is Emperor. Thorne meets Meimi after making good on one of his father's promises.
I suggest that you read Scythe first so that you know who the characters are in this series, and what happens to bring us to this point. Second, this book actually overlaps with Alien Minds, so yes, I do recommend that you keep that in mind before jumping into this story. Since Meimi and Thorne are the main characters of this story, the author alternates chapters between them. After a confrontation with Thorne's father Cole, Emperor of the Omniverse, on Umbra, the two are separated by and Exile Void.
Back on Earth, Meimi at least has her best friends at ECHO Academy, Zoe and Chloe along for the ride. Cole has to either trust his own brothers, Slate and Justice, or find a way to stop Cole from claiming Meimi as his transcendent. Under the Boston Dome, Meimi has to also deal with an unhinged professor who wants Meimi to help him design an invention that can invade Umbra. Thanks to Zoe and Chloe, at least Meimi is able to band together a band of super geniuses and misfits in order to break through the exile void.
I am not sure it's possible to have worse parents than Thorn, but I imagine I've come across them a time or two over the last 11 years. Throne refuses to accept defeat. While Meimi is working to find a way to break thru the Exile Void and reunite with Thorne, Thorne is discovering family secrets that could actually give him a leg up on how to finally. The most interesting part is that Thorne and Meimi each can control access to what's being called the Crown Sentient where Cole gets his powers from. Even the discovery of Meimi's true heritage makes things a little bit more interesting as the story moves forward.
At the end of this book, it appears as though the author has decided to quit writing any more stories in this series. She's claiming that if she does come back to this series, it will be as separate stories featuring Justice & Zoe, Slate and Chloe. This is the same author who writes the Angelbound Origins series and she also just started the Pixieland Diaries. So, as you see, the author has a whole lot on her plate.
Dimension Drift Series
1. Scythe
2. Umbra
3. Alien Minds
4. ECHO Academy