#Review - Return Once More by Trisha Leigh #YA #SyFy #Romance 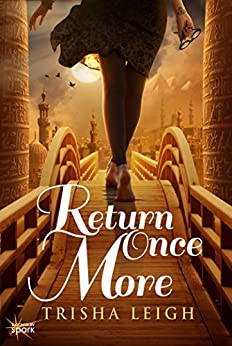 
Years have passed since refugees from a ruined Earth took to space, eventually settling a new system of planets. Not only has science made the leaps necessary to allow time travel, but the process engineered a strange side effect - predicting your one true love.

Sixteen-year-old Kaia Vespasian is an apprentice to the Historians - a group charged with using time travel to document the triumphs and failures of the past - and she can't resist a peek at her long-dead soul mate in ancient Egypt.

Before she knows it, she's broken every rule in the book, and the consequences of getting caught could destroy more than just her new romance. But when Kaia notices a fellow classmate snooping around in a time where he doesn't belong, she suspects he has a secret of his own - and the conspiracy she uncovers could threaten the entire universe.

If her experience has taught her anything, changing history means facing the consequences. The Historians trained her to observe and record the past, but Kaia never guessed she might have to protect it - in a race across time to save her only chance at a future.

Return Once More is the first installment in author Trisha Leigh's The Historians. The story is set in the year 2560. In 2510, irreversible destruction on Earth sent people into space. Sanchi, Amalgam of Genesis, is where we find out main protagonist Kaia Vespasian. Genesis was born out of the desire for peace and harmony. Kaia and her family are direct descendants from the Original colonizers, as well as Roman emperor Vespasian who ruled from from 69 to 79 BC. Vespasian founded the Flavian dynasty that ruled the Empire for 27 years.

On Genesis, citizens are exiled for only the gravest infractions, and families are often exiled with the person who committed the infraction. Kaia is an apprentice historian. She and her mates go on research trips back to important moments in history like the assassination of Julius Caesar to observe, record, and reflect. Historian Elders claim they are attempting to prevent the past from rising up on this new utopian where weapons are illegal, and crime is pretty much null.

Kaia's brother Jonah went off script 3 years ago, and now is considered a pirate. So, when Kaia finds Jonah's travel cuff, it sends her on a discover mission to find out what he's been up to, as well as what the Historian are doing. Kaia's friends are Analeigh Frank and Sarah Beckwith. Sarah has found her true companion with a fellow student named Oz Truman who Kaia discovers is doing some unsavory things that she herself end up getting involved in things she should have walked away from. After all, she has a target as large as Jupiter on her back thanks to Jonah.

Part of this story is about finding ones true companion when they turn 17. For Kaia, finding her companion ends up sending her back to Ancient Egypt and the son of Cleopatra, Caesarion aka Ptolemy Caesar who only lived 17 years before being killed by Octavian, the later Roman emperor Augustus. The romance between Kaia and Caesarion, the already over two thousand years dead Egyptian soul mate, was somewhat fairy tale-like, a tragic one, but fairy tale nonetheless. It also reverberates throughout history which is something she has been warned to avoid at all costs.

The story ends on a cliffhanger sort of ending. Kaia is in huge trouble. Oz is someone involved in major conspiracy that could have lasting effects. Her friend Analeigh found trouble helping Kaia, and her friend Sara is no longer speaking to her for reasons I won't spoil for fear it will take away from what really happens and why. I chose to read this book in the middle of the Pandemic to rid myself of a ever growing piles of books that I planned to read but shoved aside. Was it a good choice? Maybe. The idea of time travel is at the top of my list of things I like to read about. The idea of true companions is really nothing more than soul mates in other genres.