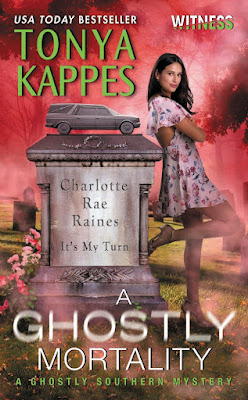 In the 6th novel in Tonya Kappes’ Ghostly Southern Mystery series, Charlotte Rae Rines comes back to Sleepy Hollow, but as one of the dead

That ghost sure looks . . . familiar.

Only a handful of people know that Emma Lee Raines, proprietor of a small-town Kentucky funeral home, is a “betweener.” She helps ghosts stuck between here and the ever-after—murdered ghosts. Once Emma Lee gets them justice they can cross over to the great beyond.

But Emma Lee’s own sister refuses to believe in her special ability. In fact, the Raines sisters have barely gotten along since Charlotte Rae left the family business for the competition. After a doozy of an argument, Emma Lee is relieved to see Charlotte Rae back home to make nice. Until she realizes her usually snorting, sarcastic, family-ditching sister is a . . . ghost.

Charlotte Rae has no earthly idea who murdered her or why. With her heart in tatters, Emma Lee relies more than ever on her sexy beau, Sheriff Jack Henry Ross…because this time, catching a killer means the Raines sisters will have to make peace with each other first.

A Ghostly Mortality is the 6th installment in author Tonya Kappes Ghostly Southern Mysteries series. Emma Lee Raines is proprietor of a small-town (Sleepy Hollow) Kentucky funeral home called Eternal Slumber. She's also a “Betweener.” Emma helps those who were murdered and are looking for a resolution before moving onward. After Emma Lee solves who murdered them, only then can they cross over to the Great Beyond, Big Guy In The Sky.

Psychic Debbie Dually was the one who informed Emma Lee that she wasn't crazy, she was a Betweener, someone who can communicate with ghosts with the not-so-dearly departed. In fact, she told Emma how she was the only one that could help solve their murder to help them rest in eternal peace.  This story actually picks up immediately after the events of A Ghostly Reunion with the funeral of a former classmate of Emma's who she helped adding to her total.

Now we are onto someone even closer to Emma herself. Emma and her sister Charlotte Rae inherited Eternal Slumber from their parents and ran it together, until Charlotte left to work at Hargrove’s Funeral Homes. Emma visits her to have Charlotte sign legal papers, but Charlotte’s deftly avoids signing the papers. In fact, the Raines sisters have barely gotten along since Charlotte left the family business for the competition.

When Emma later sees Charlotte, but others can’t, she realizes that Charlotte has been murdered. Since Charlotte has no memory of the event, Emma copes with her despair and loss as she tries to discover who murdered her sister.  Emma beau, Sheriff Jack Henry Ross, knows of Emma Lee’s abilities and cautions her to let him handle the investigation. He knows she often meddles where she shouldn’t and places herself in danger, but this case is too close to home for Emma Lee to ignore, especially with Charlotte constantly by her side.

It's fair to say that parts of this book are emotional. Charlotte once agreed that Emma suffers from a condition called funeral trauma. Little did she know that she would have to rely on Emma to find out who was responsible for killing her and why. One of the other reasons it was emotional for me is that the sisters finally understand how truly they really love each other despite all the nonsense that has separated them and caused hurt feelings. I also had mist in my eyes over Grandma Zula's reaction to Charlotte's death. Holy crap. It was also a bit on the humorous side to be honest. Gradma Zula is this books entertainment value and never fails to do what she does as a fine Southern Woman raised and bred.

I am slowly making my way through this series, but have been sytmied by the shut down of the local libraries. I'd love to get fully caught up before diving into the next (2) books in the series.  Thank you to B, from #TalkSupe who got me interesting in this series.