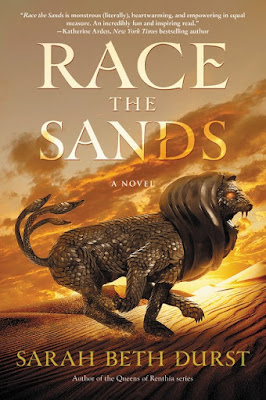 In this epic standalone fantasy, the acclaimed author of the Queens of Renthia series introduces an imaginative new world in which a pair of strong and determined women risk their lives battling injustice, corruption, and deadly enemies in their quest to become monster racing champions.

Life, death, and rebirth—in Becar, everyone knows that who you are in this life will determine what you are in your next life. The augurs can read your fate in your aura: hawk, heron, tortoise, jackal, human. Armed with that knowledge, you can change your destiny with the choices you make, both in this life and your next. But for the darkest individuals, there is no redemption: you come back as a kehok, a monster, and you will always be a kehok for the rest of time.

Unless you can win the Races.

As a professional trainer, Tamra was an elite kehok rider. Then a tragic accident on the track shattered her confidence, damaged her career, and left her nearly broke. Now Tamra needs the prize money to prevent the local temple from taking her daughter away from her, and that means she must once again find a winning kehok . . . and a rider willing to trust her.

Raia is desperate to get away from her domineering family and cruel fiancé. As a kehok rider, she could earn enough to buy her freedom. But she can’t become good enough to compete without a first-rate trainer.

Impressed by the inexperienced young woman’s determination, Tamra hires Raia and pairs her with a strange new kehok with the potential to win—if he can be tamed.

In this epic standalone fantasy, Sarah Beth Durst's Race the Sands introduces an imaginative new world in which a pair of strong and determined women risk their lives battling injustice, corruption, and deadly enemies in their quest to become monster racing champions. In the desert world of Becar, people are reincarnated upon death and the worst of the worst are reincarnated as kehoks, or demons that are the dream spawn of Simic monster hybrids.

As a former Becaran Races winner who is now thought to be cursed, Tamra Verlas is a trainer who understands the risks involved with the kehok races and trains her pupils not to bond with their charges. Tamra would do anything to protect her 11-year old daughter Shalla who was chosen to become one of the Augurs who can tell you what you were in a previous life, and what you'll become in your next. When her patron, Lady Evara, gives Tamra an ultimatium of training a winner or be fired, Tamra buys a black lion kehok with the intent fixing her reputation after an accident the previous racing season.

All she needs is a rider. Raia is desperate to get away from her domineering family and cruel fiancé. As a kehok rider, she could earn enough to buy her freedom. But she needs a first-rate trainer. Impressed by the inexperienced young woman's determination, Tamra hires Raia and pairs her with a strange new kehok with the potential to win -- if he can be tamed. Raia and Tamra's relationship is that of a mother to a daughter and it's wonderful to see. Raia and her kehok bond almost immediately through a series of trials, tribulations, failures and amazing accomplishments.

That is if they can only avoid royal conspiracies, Becaran Races, assassinations, her competitors vying for fame and fortune, as well as a possibility of war on the horizon. Then there are the monsters. The kehok are monsters that would do Doctor Moreau proud—from lion and lizard combinations, rhino and jaguar, to horse and jackal monstrosities, to a black lion with steel scales. These monsters are the rebirth of the "darkest, most evil souls" of Becar which in and of itself is an interesting view on reincarnation.

Tamra and Raia are the main characters yes, but don't over look Lady Evara who puts together a plan to get Raia to the Becaran Races. This society is heavily dependent on priest-like councilors called augurs like Yorbel who uncovers a shocking truth about kehoks that could destroy Becare as well as Prince Dar. Emperor-to-be Dar who is seaching for his brother's soul before he can be crowned Emperor. He has to deal with unruly ambassadors, a population growing restless, and the thought that his country will soon be invaded by a neighboring county unless his brothers soul is found quickly.

It's fair to say that Sarah Beth Durst is an author that I am looking forward to see what she writes next. This is a story that has little romance, but could have if the author chose to do so. I'm glad she focused on Tamra and Raia's journey instead.