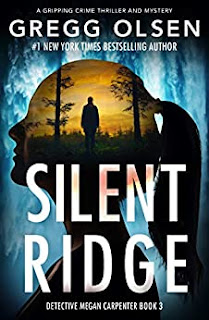 One bath wall is a mural of a brilliant-yellow sunflower. The theme carries over to the shower curtains, but the yellow vinyl is spattered with red blotches. Propped against the mirror is a South Kitsap High School photo of a teenaged girl.

Detective Megan Carpenter is no stranger to horrifying crime scenes, but when she arrives at the home of a woman whose body has been brutalized, Megan is shocked to discover that she knows the victim. Monique Delmont helped Megan when she was in danger years ago. And the killer has left a disturbing calling card… two laminated photographs of a sixteen-year-old high school girl – Megan.

Someone is taunting her in the worst way possible and Megan is convinced she knows who is responsible. She just has to find him.

With the help of her new partner, Deputy Ronnie Marsh, Megan begins to unravel the clues that will lead them to the killer including links to three female murder cases from nearly twenty years ago – one of which was Monique’s daughter.

But to protect those closest to her, Megan must continue to hide the dark truth of her past, even if that means lying to her team about her connection to Monique.

When two photographs of a teenage Megan are found at her boyfriend’s place in Snow Creek, she knows the killer is circling and ready to strike again.

Can she get to him before he finds her? And will she pay the ultimate price for trying to keep her terrifying past buried?

Dark Ridge is the third installment in author Gregg Olsen's Detective Megan Carpenter series. **Slight Spoilers** Dark Ridge begins with the viewpoint of a killer who we learn is female. The killer, who burns with hatred towards a woman named Rylee, knows all about Detective Megan Carpenter's past and what she did to her serial killer bio-father and his psychotic wife before faking her own death. In return, the unnamed killer targets those closest to Megan including a woman named Monique Delmont, an advocate for victims of violent crimes, who helped her disappear and change her name, as well as Dan, Megan’s would-be boyfriend.

After arriving at a murder scene and witnessing a very dark scene right out of Silence of the Lambs, Megan's past and present collide when photographs of her at work and as a high school student are found at the gruesome crime scene. The victim is a woman Megan had taken into her confidence and whose daughter had previously been murdered by the same serial killer who stalked Megan. Megan ends up partnering with recently promoted Deputy Ronnie Marsh who was previously kidnapped and injured but is extremely effective when it comes to research.

As the investigation progresses, Megan becomes more and more sure that a person connected to her serial killer/ biological father is likely stalking her. Could it be the same person who murdered Monique’s daughter? Readers have known from the beginning of this series that Megan is living under borrowed time. She been constantly stalked by an unknown person named Wallace and takes to keeping a gun fully loaded under her pillow. Her brother Hayden has shown up with no rhyme or reason for his visit in Port Townsend after being discharged from the military.

Hayden, who she tried to protect, joined the Army, and has never forgiven her for what she did. Hayden has anger in his veins for being left behind and Megan ignoring their mother who is in prison. It was only a matter of time before Megan has to deal with Hayden’s issues. Megan is a dedicated and intuitive investigator who seems to leave bodies wherever she goes. Megan also has an incredibly dark and tangled past which we learned from the tapes she listens to whenever she needs help keeping her head straight.

Her past is unknown to her colleagues and virtually all her friends, including Chief Ronnie Marsh who she thinks of as a father figure. She believes that if Marsh found out the truth, she would lose everything, again. Megan has been living under an assumed name ever since she killed her serial killer bio-dad and his psychotic wife and then decided to make people believe she was dead. If Megan reveals her past and her connection to the murder victim, will anyone be able to trust her again? Stay tuned.

One of my wishes is that Megan's frequent reminiscing over past events would come to an end. Just when things are getting good, Megan takes a step back to her past which is filled with not so pleasant situations. Megan needs to look into her future and find out why Hayden is really here, and whether or not Wallace is really Hayden, or someone living in plain sight. Megan finally begins to understand that she doesn’t have to do everything on her own. Having Ronnie as a partner has major advantages as to the lone wolf approach she normally takes.

Not a standalone book, this is firmly part of a series that needs to be read in order. This book is also being sold as Silent Ridge via Amazon and elsewhere thus the two titles of this review.