#Review - Fate of the Fallen by Lindsey Fairleigh #Fantasy #Mythology 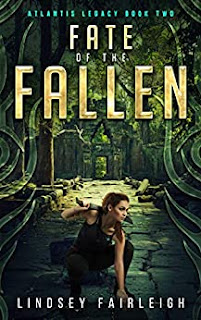 Fate of the Fallen is the sequel to the exhilarating treasure-hunting adventure, Legacy of the Lost.

Some myths hold a seed of truth. She must uncover the truth behind the myth of Hades, god of the underworld...before it destroys her.

Using wit and gumption—along with a hearty dose of her newfound psychic gifts—Cora Blackthorn has narrowly escaped the clutches of the Custodes Veritatis. With the help of her closest friend and strongest ally, Raiden Cross, as well as her mental hitchhiker, Persephone, Cora must outrun the sinister secret order long enough to uncover the mysteries left behind by Hades, the last of the Olympians. But when an ancient treasure hunt turns into a wild goose chase, Cora fears the worst—the quest is hopeless.

Until an unexpected discovery sets Cora on a new path. A hidden civilization thrives deep underground beneath the Amazon rainforest, and they have been waiting for Persephone's return. With their help, Cora discovers that the greatest danger to her life isn't the Order; it is Persephone, herself…

Fate of the Fallen is the second installment in author Lindsey Fairleigh's Atlantic Legacy series. Now that Cora Blackthorn knows she's sharing a consciousness with Peri (Persephone) a reincarnated Amazon warrior, she is determined to find Hades before her brain fractures. Her first stop in this story is the Amazon Rainforest along with Raiden Cross. Armed with Peri's Doru, her hoplon suit, and regulator, as well as a Hades memory sphere, Cora is desperate to find Hades.

Unlike the myths, he is also an Olympian from Planet Olympus and apparently has been in cryo slumber off and on for thousands of years hoping to resurrect the Olympian's which he apparently has thousands in storage. Of course it's not an easy journey to find Hades when there is another group, the Custodes Veritatis, determined to get there first at any and all costs. Cora and Raiden's discovery of a remarkable people called Zari led by Ilyana, who has apparently been waiting for Peri or Hades to return, throws them for a loop.

Ilyana knows all about the Custodes Veritatis since they once arrived and took all the priceless artifacts back to the Vatican with them. The same place where Cora and Raiden recently escaped from after solving Hades labyrinth. Hades created underground tunnels that look remarkably like the Tartarus  ship that brought Peri and the Olympians to Atlantis on. Atlantis is what the Olympias call Earth. Ilyana is technically an Atlantean not like Hades and Peri. Cora's issues are just beginning.

It doesn't help that the Primicerius of the Custodes Veritatis demands that Cora declare her loyalty to them and their mission which she has no intention of doing. I think I've said this before, but I'll say it again. If you liked Lara Croft Tomb Raider or Stargate, this series is right up your comfort zone. There is plenty of action as the author takes readers from the Amazon Rainforest to Ireland to Egypt in search of answers and of course, Hades who may have to intercede in saving Cora from losing her self entirely. Cora's connection with Peri gives her a grab bag of psychic gifts, but it may also end up killing her unless she can find Hades.

The cast of this story actually expands a bit when a girl named Meg tries to kidnap her at her mother's urging and ends up becoming bound to Cora which means if one of them dies, both of them dies. Meg is a good addition since there are things she knows that actually help, not hinder, Cora's search for Hades.  We also get the return of Diana Blackthorn who stole Peri from the Custodes, Emi Cross who is Raiden's mother, and Fiona, a game researcher who is best friends with Cora and owns her own castle in Ireland.

This series is all about ancient mysteries, Greek mythology, treasure-hunting adventurers, and dynamic characters. What is Hades really hiding? Eternal life? Priceless treasures or knowledge of the ages? What happened to the rest of the Olympians on Earth?