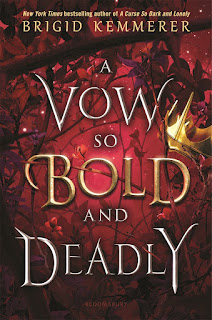 Face your fears, fight the battle.

Emberfall is torn between those who follow Rhen and those who are eager to begin a new era under the true heir, Grey. Grey has agreed to wait two months before attacking Rhen, and in that time, Rhen has sought the assistance of a spy despite Harper's doubts.

Fight the battle, save the kingdom.

Meanwhile, Lia Mara struggles to rule Syhl Shallow with a gentler hand than her mother. But some of her subjects aren't happy that Lia Mara has an enchanted prince and magical scraver by her side. As Grey's deadline draws nearer, Lia Mara is forced to question whether or not she can remain allied to his cause.
This compulsively readable saga continues as two kingdoms come closer to conflict—and an old enemy resurfaces who could destroy them all.

A Vow So Bold and Deadly is the third and final installment in author Brigid Kemmerer's Cursebreakers. What began as a retelling of Beauty and the Beast, has turned into something else entirely. This story revolves around four characters: Grey, Rhen, Harper, and Lia Mara. The story begins with Grey in Syhl Swallow after he granted Rhen 60 days to prepare for war. Meanwhile, Rhen, whose curse was broken by Harper, is holed up in Ironrose Castle trying to bring his Grand Marshal's to an agreement to provide troops, but they don't trust him after he was stuck in beast form after having been cursed by Lilith.

With rumors spreading far and wide about an unknown heir, his own people are turning against him as well. What does he have to do to earn their respect? He's also holding a damaging secret about Lilith that could shatter his relationship with Harper. Harper, who is still playing the part of a Princess from Disi, is hearing rumblings that she's a traitor for not providing the necessary resources to protect Emberfall from Grey. Syhl Swallow is where we also find Lia Mara as the new Queen who is struggling to find a common ground with her people. She desperately wants peace and doesn't to go to war against Rhen.

Her last meeting with Rhen didn't go all that well, but she has Harper to thank for saving her life. Lia Mara at least has Grey by her side helping train her soldiers to prepare for war if it comes to it. Lia Mia is being pushed and pulled not only by her advisers, but by her own sister Nolla Verin who seems not to have the courage to stand by Lia Mia until much later in the program. Nolla was also the heir designated until Lia Mia took the crown from her mother. A faction of her own people are afraid of magic, and therefore Grey who is a magicsmith. Lia Mara also faces challenges by her inner circle who are aiming at a much grander scale for Syhl Swallow.

Grey is also finding problems. He is now in a land where men are only valued for the ability to carry heavy loads and the willingness to die in battle when ordered. He faces language issues with Lia Mara's captains and soldiers. He continues to try to protect Tyche, while also learning magic from Iisak. He, like Lia Mara would love to find a peaceful solution to not going to war and killing thousands of innocent people, but how do you get thru to someone you gave years of your life to protect?

Once again, Harper, who has cerebral palsy, makes some really dumb mistakes in this story. But you don't want to hold it against her since she's dealing with her own weaknesses and failures by not going with Grey and her brother when they left, and not doing more by standing with Rhen against everything he's had to deal with. When tragedy hits Ironrose Castle, Harper gets credit for doing the near impossible in reaching out to Grey, who she still believes is her friend, and her own brother who has become Grey's second in command.

Harper's terrifying journey to stop a war, and fight against Lilith, brings about a bit of hope and change with her. It makes what eventually happens that more satisfying. I think the more interesting aspect of this story is that there really is only one villain and that's Lilith. Lilith's machinations towards Rhen drive what happens in this book. Lilith's determination to crush anyone who takes a stand against her, makes for a very dark and bloody story. I do have a whole lot to say about the ending.

First, it was too abrupt. All the build up to a war between Gray and Rhen fizzles out quickly. Rhen was so stubborn throughout the story, but in the end it took almost nothing for him to surrender and become a man with an unknown future. Grey, who stood by Rhen while he was cursed, is now thrust into a new position while Rhen is supposed to do what with his life now? It's not like Harper wants to return to a home that has no future for her or her brother. So, what next?