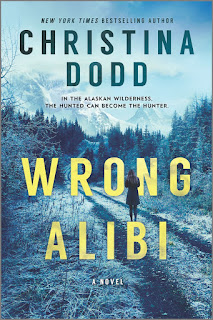 From New York Times bestselling author Christina Dodd comes a brand new, standalone thriller featuring a bold and brash female protagonist, a brutal and twisty murder that will have readers turning the pages and a villain that will have them keeping the lights on at night. WRONG ALIBI is perfect for the thriller/suspense category and fans of Lisa Jewell, Karin Slaughter, and Sandra Brown.

WRONG JOB
Eighteen-year-old Evelyn Jones lands a job in small-town Alaska, working for a man in his isolated mountain home. But her bright hopes for the future are shattered when Donald White disappears, leaving her to face charges of theft, embezzlement—and a brutal double murder. Her protestations of innocence count for nothing. Convicted, she faces life in prison…until fate sends her on the run.

WRONG NAME
Evie's escape leaves her scarred and in hiding, isolated from her family, working under an alias at a wilderness camp. Bent on justice, intent on recovering her life, she searches for the killer who slaughters without remorse.

WRONG ALIBI
At last, the day comes. Donald White has returned. Evie emerges from hiding; the fugitive becomes the hunter. But in her mind, she hears the whisper of other forces at work. Now Evelyn must untangle the threads of evidence before she’s once again found with blood on her hands: the blood of her own family…

Christina Dodd's Wrong Alibi claims to be part of a series called Murder in Alaska, but I dare say it can be read as a standalone. 18-year-old Evelyn Jones has had an very rough life. She was sent to Juvenile Detention in San Jose, California for something she didn't do just because she had been part of a gang. Her own mother, Ioana, told her to stay away until she cleaned up her act. Upon release, Evie found work in Rockin, Alaska thanks to a mysterious man named Donald White who was looking for a bookkeeper, and someone to do odd jobs.

Without spoiling anything, little things that Donald did or said just didn't add up for Evelyn. Little did she know that within days of her arrival, she would be charged, convicted, and sentenced to 99 years in prison for the brutal double homicide of a mother and her son. Nobody listened to her when she told them she was innocent. While in transit to jail, there's a bizarre accident. Thanks to a whole new identity, Evie literally disappeared into the Alaskan wilderness where she would eventually find the Midnight Sun Fishing Camp Katchabiggie Lodge owned by Hawley Fogg.

Within 8 years, Petie, had become camp director. For a 8 months of the year, Petie lives alone in the wilderness. However, Donald White, con man, and the real murderer, is not far from her desire for revenge. Petie who lost everything, has chosen to be an investigator and investor. Thanks to her, a woman named Jeen Lee was able to find her missing son who she thought was killed by his nursemaid. Jeen Lee knows who Petie really is. But thanks to Jeen Lee, Petie learns that Donald White is alive and living under a new name. The worst part, he's returned to Rockin and has grown close to a woman Petie knows well.

Part of the story is told from the narrative of Zone Jameson, an antiquities expert as well as the husband and father of the murdered woman and child in Rockin. Zone was a prisoner of a rebel group for weeks while his family was being murdered. He fully blames Evelyn Jones for the murder of his family and has made it his mission to make her pay. He will soon realize that things just don't add up and it looks as though Evie was made a scapegoat. Zone and Petie will need to work together in order to prevent Donald from once again escaping and taking yet another life of someone Petie knows.

The plot was straight forward with a few good twists that kept me hooked until the very end. I actually found myself forgiving Ioana for her dismissal of her daughter which led her to move to Rockin with Evie's sister Marya. The book was a bit choppy, to say the least. The twists became many, and there was more than one red herring. Revenge may have been the dominant theme of this story, but the reader will see where the characters went through a process of healing and forgiveness. I am curious about whether or not this is part of a series or not. This story has a beginning and an ending, so if there is another book, it will need to focus on other characters.