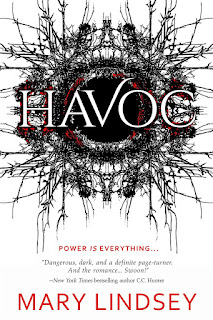 The next installment of a thrilling and sexy new werewolf series, full of girl power and heart-pounding paranormal action.

For the first time in his life, Rain Ryland has it all: a home, a family, security. The newly minted shape-shifter even has a place in the pack—the coveted spot right next to his girlfriend, Freddie, who will assume the role of Alpha in a few weeks at the Solstice celebration.

But Rain's peace is shattered when a stranger from Freddie's past returns to the tiny town of New Wurzburg with the power to disrupt the pack and destroy his relationship with Freddie.

When dead bodies mysteriously begin to rise as revenants, the pack and coven square off in a power struggle that could erupt in civil war. Rain and Freddie must choose whether to trust their instincts or their hearts as enemies close in from all sides—even from within.

Havoc, by author Mary Lindsey, is the second installment in the authors Haven series. This story takes place 5 months after the ending of Haven. So, let's rewind a bit since the last installment came out in 2017, and then was delayed until this year. The primary storyteller is Aaron "Rain" Ryland. Rain, who spent time homeless, then found himself in the Texas Hill Country town of New Wurzburg after learning that he has an aunt, Ruby, who works for the New Wurzburg Police Department. What he didn't understand is that New Wurzburg is a community that is masking a struggle between Watchers and Weavers.

At the center of the struggle is none other than Friederike Burkhart. Freddie is the presumptive Alpha to be now that her father was murdered. Freddie isn’t like normal teen girls. She's actually a Watcher aka Werewolf who wants to change things where Weavers no longer have control over her pack or have anything to say what Freddie and her pack are allowed to do once she becomes Alpha. And, after the events of Haven, Rain is also a Watcher thanks to a powerful sealer. The story opens with a look at what’s to come for Aaron and Freddie which really isn’t good, especially for the woman who literally saved Aaron’s life. Someone is wanting a war between the shifters and witches and they don’t care who gets hurt in the process.

Rain likes being a wolf, especially when he’s with Freddie and her cousins who work at Haven Winery. When four strangers from Germany show up in town from, descendants of the original Hill Country settlement, including a woman who left Freddie behind 18-years ago, everything changes. There’s a contract that binds Freddie to someone she’s never met, nor has she heard of such a binding contract. The rule stipulates that Rain and Freddie can’t be together. They can’t talk, they can’t bee seen in the same place together. There are other weird things going on.

To make matters worse, someone is targeting not only Freddie, and Aaron, but Petra as well. Petra is targeted because she’s the coven’s sealer who seals the dead so that they don’t wake as revenants. Petra has been doing the job correctly, but someone has decided that she needs to be removed from the picture since she also has a curious ability to see the future. Petra is a key player in this story and for good reasons. She has some unique abilities, and she genuinely lights up when Rain calls her friend. The bad part is that she literally has egomaniacs as parents who look down on everything she does.

After Rain eats a cookie, he sees dark possibilities for Freddie that he’s going to do whatever he can to prevent it from happening. Grant is a Weaver who is in charge of pack oversight thanks to his own father’s destructive behavior in the first installment. At several points in this story, Freddie and Rain wanted his head for what he does and doesn’t do including his knowledge of said contract. Aaron’s disgust with the Elders and the Council is palpable. You can feel the hurt and the desire to prove everyone wrong about him, and Freddie, as well as Petra. There are, of course, surprises that pop up at the end of this book. No spoilers, of course.

As with the first installment, there’s a beginning, a middle, and an ending which could be thought of as a standalone story. Will there be another story in this story? I’d be shocked if there were, but stranger things have happened. I recommend reading the books in order. Especially after such a long wait between books.