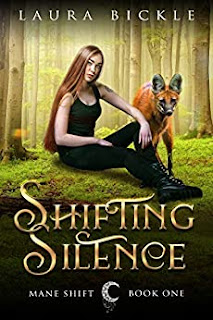 At least, that used to be the rule…

Luna Summerwood has always taken in strays. As a witch who runs a veterinary clinic, she’s healed creatures that fly, swim, and crawl. She’s not the most powerful Summerwood witch; her only magic is the ability to communicate with animals. But when an exotic maned wolf is brought to her in the dead of night, Luna is plunged into the shadowy underground world of shifter trafficking.

With the help of her ex-boyfriend—who also happens to be a local deputy and someone who pushes all her buttons—she investigates a series of occult crimes involving missing farm animals. After her ex is nearly killed, Luna discovers that the Casimir, a cult of magical collectors, plans to steal the maned wolf.

This beautiful maned wolf is more than he seems—he’s a shapeshifting man named Renan. He was once captured by the Casimir and forced to do their dark bidding. Luna is his last chance at finding sanctuary…and perhaps love.

But the Casimir want more than just Renan. Centuries ago, the Summerwoods warred with the Casimir. Now, these sorcerers will stop at nothing to possess the Summerwood land and the buried magic of the witches themselves.

Shifting Silence is the first installment in author Laura Bickle's Mane Shift series. Luna Summerwood is a veterinarian and witch who can talk to animals. She lives on the land that her family has owned for generations along with her Aunt Celeste who was there for her when her parents died. The story beings when Luna's ex-boyfriend, Deputy Sheriff Dalton, drops off a supposed wild creature that has been badly injured. While investigating a series of occult crimes involving missing farm animals, Luna is plunged into the shadowy underground world of shifter trafficking.

Centuries ago, Estelle Summerwood warred with the Casimir. They wanted Summerwoods witches as their unwilling mates by which they can have their very own magical heirs. Thanks to Estelle finding a deep vein of power under the land, she was able to hold back and defend the land. Now, centuries later, the Casimir are back, and will stop at nothing to possess the Summerwood land, the witches, and the buried magic of the witches themselves. After Dalton is nearly killed, Luna discovers that the Casimir, a cult of magical collectors, plans to steal the maned wolf.
Luna also discovers that the maned wolf is a shapeshifter named Renan who was capture by the Casimir and forced to do their dark bidding. Curiously, Renan was an insurance investigator who traveled the world until he was taken by the Casimir. Seemingly over her head and against a driven adversary with everything to gain, Luna puts out a call to her sisters who went their own way and have been living their own lives. Haley, who is really good at creating illusions, and Starr, who can talk to the dead, give Luna, Renan, Celeste, and Dalton hopes that they cans stand against the Casimir and survive.
Luna and her sisters are warned by Estelle that if the Casimir win, they will bottle up the well water and sell it to the highest bidder. They will take the coins at the bottom of the well and do the same. They will take every brick of the house and build something terrible, a magical stronghold. This is something that they’ve never had, a place of power. And from that place, they will build an empire. Each of the sisters is also given enchanted weapons blessed with witches blood in order to make their stand.
There is an ending, a middle, and an ending to this story, but this is not a standalone. There are unanswered questions and more danger to be faced in future installments for which I will be keeping an eye out. Luna's story will continue in Shifting Summer but doesn't have a posted release date yet. I am hoping to learn more about the sisters as well. They bring their own unique form of magic with them, along with a history of being out on their own and doing things Luna could only imagine.