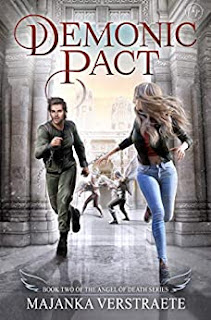 Riley, a seventeen-year-old Halfling Angel of Death, is on a dangerous mission.

To save her friend’s life, she must make a pact with the man who just tried to kill her and break him out of the Celestial Prison, guarded by Angels of War—fearsome warriors who can squash her like a fly. Even worse, if she's caught, she’ll be sentenced to eternity in that impenetrable prison.

Riley will be forced to make deals with demons and her number one enemy, turn her back on her friends, and risk losing her family forever.

Worst of all, her very existence depends on her devious new allies.

Demonic Pact is the second installment in author Majanka Verstraete's The Angel of Death series. The story takes place in the fictional city of Fairhaven where vampires, trolls, demons, witches, halflings, and Angels mingle among unaware humans. Riley, who was awakened after a serious car accident to the world she lives in, is a seventeen-year-old Halfling Angel of Death who is on a dangerous mission to save her friend's life, and restore her soul. First, she must find a way into the Celestial Prison where Angel of Death Myron was sent after Riley stopped him in the previous installment.

But the Celestial Prison is damn near impossible to enter. The prison is guarded by fearsome warriors known as Angels of War who can squash you like a bug. Even worse, if she's caught, she’ll be sentenced to eternity in that impenetrable prison. This plan comes at a pretty inconvenient time knowing the Angel Council hates her, and hopes she fails in her first mission to bring the soul of a dead person to Heaven. Without any assistance from her Guardian Angel Leander, Riley will have to pull together an alliance of the willing.

Including her own grandmother Herbie Johnson a witch who hid the truth about Riley's heritage from her. Including Myron who just tried to kill her and sold her friend Stacey's soul to a Demon who she has to track down and bargain with in order for Riley to save Stacey. Including a boy named Damien whose family is aligned with Demons while he was cursed by a rival witch coven. A curse which only allows him to remain awake for one hour every day. A curse that reveals a shocking prophecy that was also hidden from Riley by her own grandmother.

With Myron facing a trial by his peers, Riley sets her self on a course that will likely cause major friction between herself, Leander, her grandmother, the Angel Council who wants to see her dead, and her friends Katie, Michelle, and Craig. Worst of all, her very existence depends on her devious new allies. Will Riley become another Darius who caused numerous problems for the Angels and Heaven? Will her new friend Damien who is a half witch and half human help save the day? Will Riley  be able to bring Stacey's soul back from the Demon who owns it? Will Riley ever find out who her Angel father is, and will he be able to keep Riley from being killed off by the council? Will Leander be able to save Riley from her own stupidity?

Since the story ended on a cliffhanger, I guess I will just have to read the sequel whenever it releases and find out what happens next. Thank you to the publisher for providing me a free copy of this story in lieu of a honest review. The thoughts are my own, and nobody else's.