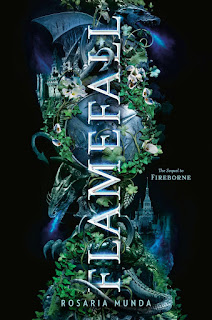 Revolutionary flames ignite around Annie, Lee, and a brand new character in the follow-up to FIREBORNE.

After fleeing the revolution and settling into the craggy cliffs of New Pythos, the dragonlords are eager to punish their usurpers and reclaim their city. Their first order of business was destroying the Callipolan food supply. Now they’re coming for the dragonriders.

Annie is Callipolis’s new Firstrider, charged with leading the war against New Pythos. But with unrest at home, enforcing the government’s rationing program risks turning her into public enemy number one.

Lee struggles to find his place after killing kin for a leader who betrayed him. He can support Annie and the other Guardians…or join the rebels who look to topple the new regime.

Griff, a lowborn dragonrider who serves New Pythos, knows he has no future. And now that Julia Stormscourge is no longer there to protect him, he is called on to sacrifice everything for the lords that oppress his people—or to forge a new path with the Callipolan Firstrider seeking his help.

With famine tearing Callipolis apart and the Pythians determined to take back what they lost, it will be up to Annie, Lee, and Griff to decide who—and what—to fight for.

Flamefall is the second installment in author Rosaria Munda's The Aurelian Cycle. This series focuses on three main characters: Griff, Lee, and Annie. Griff is a peasant on New Pythos called a humble rider because he was claimed by a dragon. Lee Stormscourge aka Lee Sur Paller is Dragonborn who made a life or death choice at the end of the previous installment. Antigone aka Annie is now First Rider and Fleet Commander of Callipolis Dragon fleet. Annie and Lee grew up together but her family was killed by a Dragon.

Annie is charged with leading the war against New Pythos. But with unrest at home, enforcing the government’s rationing program risks turning her into public enemy number one. Annie is stuck between a rock and a hard place. Literally. She does the unthinkable which makes people upset with her. She makes an alliance with Griff to help him against his oppressors. She has a responsibility to her people, but her people are suffering under a metals test that separates people under 4 different colors: Gold, Silver, Iron, and Bronze. In the end, Annie comes up with a brilliant strategy that leaves a hold your breath ending.

Griff knows he has no future now that Julia Stormscourge is no longer there to protect him. His dragon and the rest of the humble dragons in New Pythos are muzzled and unable to breathe their flames. Those he serves want to see Callipolis brought to their knees, but Griff feels differently. He longs to help do what is right, leading him to seek guidance from Callipolis’s new Firstrider, Annie. Griff, however, gets blindsided by a new character who hates peasants. As with Annie, his story ends on a cliffhanger.

Lee struggles to find his place after killing kin for a leader who betrayed him. Lee must make some really hard decisions as to where he lays his loyalties for the best of the people. He isn’t sure what is right anymore. One thing is for sure, though, he doesn’t want to be part of a regime that hoards rations for certain people and allows others to go hungry. He can support Annie and the other Guardians or join the rebels who look to topple the new regime.

With everything that happens in this story, it is not a shock or surprise to read the ending of this book and watch as all three characters lives are on the brink of darkness. The characters are constantly having to make hard choices and reevaluate their principles. For Annie, it's allowing people to believe that she's the villain and not whining when they treat her as such. For Griff, it's loving someone you can't have, and then making a choice to stand up for himself against tough odds. Lee seems to struggle internally and the repercussions of Lee’s actions lead to a stunning ending to the story.

Julia’s missing, and I’m in a terrible mood. Not improved by the weather, which is cold and damp, but in New Pythos, it’s always cold and damp. I’m gutting fish in a back room off the dragon lairs when Scully comes to find me.

“Dragonlord here to see you,” the lair- master says.

That’s the one way to make my day worse. Bran and Fionna, the other two squires on fish- gutting duty, exchange a look. We’re up to our arms in bits of fish bone and scales; the stink of the fish oil will follow us out of the lairs, and now I’m going to miss the one perk that comes with prepping dragon feed— sneaking the remains home. I rise, wiping my hands on the work rag.

Scully hates the sound of my perfect Dragontongue, which is why I always try to use it. “Which dragonlord”— I pause just long enough for him to wonder if I’ll add— “sir?”

Scully scowls. This is why he keeps putting me on fish gutting. Lip. Not to mention our clans hate each other. “The one you serve,” he says in Norish.

Most days, that would be good news. Today, I just wish it were Julia.

On the balustrade outside, Delo Skyfish waits for me.

I remember as a child being struck by the Callipolan exiles, when they arrived on New Pythos: at the ghostly pallor of the Stormscourge survivors, at the warm brown skin and tight curls of the Skyfish lords. Delo Skyfish no longer looks like the ragged urchin that washed ashore ten years ago, but he’s still striking, and at the sight of his fur cloak and freshly coiffed hair, I’m conscious of my own stinking state.

“Your presence is an unexpected honor, my lord.”

Delo mutters, “As you were.” I straighten; Delo is scowling at me, like he knows I’m trying to discomfort him. He’s my age, taller than I, but slenderer. “The Triarchy- in- Exile wants to speak with you.”

I hug my arms around my chest, shivering from the sea spray coming in off the water. We’re dwarfed by the cliffs above and the citadel atop them, and by the limestone pillars of karst that jut from the sea into the sky. “Did they tell you what for?”

I use the formal you, and when Delo answers, he uses the informal. When we were younger, and I was still figuring out Dragontongue, he tried to get me to use the informal, too, or speak to him in Norish, which he was learning at the same time, but I refused. In trials of will with Delo, I win.

“They want to question you about Julia,” he says. “She’s missing.”

As if I haven’t noticed.

“Why would I know where Julia is?”

From the way he says it, I don’t have to ask what.

The last time I saw Julia, her lips were on mine. In the dark I could feel, not see, her smile as she bunched my shirt to raise it. She always smiles, like what we’re doing is a game, and it amuses her to win.

I’ve stopped walking, and Delo stops, too, turning back to me. His face says everything I need to know about what’s about to happen in the Glass Hall. He doesn’t say I’m sorry, and I don’t say Ixion had no right. By now, I’m no stranger to the humiliations Ixion devises.

Like being called before the Glass Hall as Julia’s peasant lover stinking of fish.

As if he’d heard me think it, Delo reaches into his satchel. “I brought you a fresh shirt.”

Most of Delo’s clothes are blue, the color of his House, but this shirt is plain, undyed— appropriate for a peasant. Even so, it’s finer than anything I’ve ever owned, and I’m likely to ruin it with muck. I pull it over my head, and when I look up, Delo’s watching me. He looks away, down. The shirt smells like him.

I follow Delo up the winding outer stairs, carved into the side of the cliff and looking out over the North Sea, that connect the lairs where I work to the citadel at the summit. Both were built by the ha’Aurelians in the original conquering, when they invaded Norcia with their dragons, subjugated my people, and renamed our island New Pythos. The dragons’ bloodlines dried up in the cold not long after, but the lords remained.

And now, for the first time in generations, they have dragons again. Twenty-five dragons, brought as eggs by the Callipolan exiles ten years ago.

Dragons for the exiles’ surviving sons. Dragons for the sons of the lords on whose hospitality they imposed. Titles for their children in a future, greater Callipolis.

But there weren’t enough sons. The exiled Triarchy was forced to present the remaining hatchlings to others. Female dragonborn, like Julia. Bastards, who trickled in from Callipolis’s vassal islands, once despised for their illegitimacy but now needed.

So, with a fleet not yet filled, the dragonborn resorted to a measure few believed would work.

They had the remaining dragons presented to the sons and daughters of their Norcian serfs.

And the dragons Chose.