#Review - Down Comes the Night by Allison Saft #YA #Fantasy 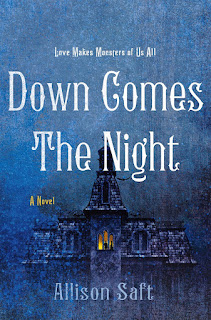 A gorgeously gothic, deeply romantic YA debut fantasy about two enemies trapped inside a crumbling mansion, with no escape from the monsters within.

Honor your oath, destroy your country.

Wren Southerland is the most talented healer in the Queen’s Guard, but her reckless actions have repeatedly put her on thin ice with her superiors. So when a letter arrives from a reclusive lord, asking Wren to come to his estate to cure his servant from a mysterious disease, she seizes the chance to prove herself.

When she arrives at Colwick Hall, Wren realizes that nothing is what it seems. Particularly when she discovers her patient is actually Hal Cavendish, the sworn enemy of her kingdom.

As the snowy mountains make it impossible to leave the estate, Wren and Hal grow closer as they uncover a sinister plot that could destroy everything they hold dear. But choosing love could doom both their kingdoms.

Allison Saft’s Down Comes the Night is a snow-drenched, gothic, romantic fantasy that keeps you racing through the pages long into the night.

Down Comes the Night is author Allison Saft's debut novel. Told in the third person point of view, the story follows Wren Southerland who is a brilliant healer and Queen's Guard and unwanted niece of Queen Isabel. After 300 years of war, Isabel brokers an armistice with Vesria. Her hopes is that things could get back to normal. That is until soldiers, including Wren's only other friend, go missing while patrolling the borders with Vesria. Wren and Una Dryden, her commander and best friend, capture a possible spy holding a book with notes on the missing, only to have Wren heal the prisoner who then escapes. Unfortunately for Wren, the Queen really doesn't like her. She feels betrayed by her sister falling in low with a low born. She grows impatient with Wren's carelessness and threatens to send her back to the Order of the Maiden where she was sent as a baby.
For Wren, magic and medicine provided Wren with an escape from the loneliness of growing up alone and being ignored by Isabel her own flesh and blood. She's really good at both. After her mistake, Wren is banished back to the Order of the Maiden where she receives an interesting request from Lord Alistair Lowry of Cernos. Cernos has ignored all requests for aid for years. But now it seems that Alistair has a major problem on his hands, and since Wren is at the top of the list of healers and surgeons, she's the answer to his problem. After Isabel orders Wren to the mines to heal the miners, Wren chooses a different path. Wren decides to take up Alistair's offer and travels to Cernos. Things at Alistair's mansion are desperate. Servants have died. Another lies dying. The weather outside is downright frightful.
But the most shocking moment comes when Wren comes face to face with the monster known as Hal Cavendish, aka Reaper of Vesria. The same Hal who was listed as missing. The same Hal who has terrorized Vesna for years.  She's trapped in the snowy mountains with a murderer, but soon realizes something even more sinister is just around the corner. As a healer, Wren is a bleeding heart. She needs to do what she's good at even though Hal is her enemy. What's really interesting is that Cernos has a technological advantage over both its neighbors and now claims to want to work with Vesria. They could easily have declared war on both countries and more than likely, won. To make matters even more interesting is that Alistair wants Wren to be his official liaison to Queen Isabel after she finds a way to cure Hal.
Wren tends to bare her heart to the reader: choosing to show an enemy kindness when it would be much easier to follow orders and ignore his pain. Hal is brooding, angsty, and above all, is seeking answers and redemption. Some have labeled this as LGBT and that is because Wren is in love with her best friend Una. But in the end, it is her connection to Hal and her desire to do good that drives the final chapters of this book. Down Comes the Night is a dark tale full of nods to some classic horror tropes like the mad scientist, haunted mansions, romanticism versus enlightenment, body horror, and more.