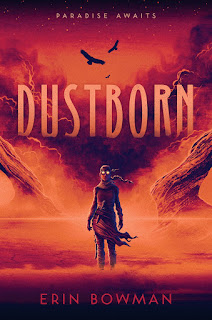 Delta of Dead River sets out to rescue her family from a ruthless dictator rising to power in the Wastes and discovers a secret that will reshape her world in this post-apocalyptic Western mashup for fans of Mad Max and Gunslinger Girl.

Delta of Dead River has always been told to hide her back, where a map is branded on her skin to a rumored paradise called the Verdant. In a wasteland plagued by dust squalls, geomagnetic storms, and solar flares, many would kill for it—even if no one can read it. So when raiders sent by a man known as the General attack her village, Delta suspects he is searching for her.

Delta sets out to rescue her family but quickly learns that in the Wastes no one can be trusted—perhaps not even her childhood friend, Asher, who has been missing for nearly a decade. If Delta can trust Asher, she just might decode the map and trade evidence of the Verdant to the General for her family. What Delta doesn’t count on is what waits at the Verdant: a long-forgotten secret that will shake the foundation of her entire world.

Author Erin Bowman's Dustborn is a bleak yet hopeful tale that follows 17-year-old Delta of Dead River as she attempts to change the world and save her pack from the machinations of the General. The story begins with Delta and her pack of mostly females struggling to survive in a world reminiscent of Mad Max: Fury Road. A band of raiders has everyone on edge. Whenever they appear, bad things happen. What makes Delta interesting you ask? She has a map branded to her back. What is the map to you ask? Read the book!
After her sister Indie dies in childbirth, Delta and the baby who she names Bay, discover that her pack was attacked, and part of the pack was taken away. To make matters worse, Delta is taken by traders including a very familiar face. Asher, who was Delta's childhood friend, was supposed to be dead but now it appears he's in league with the General. I mentioned the General above, and now we shall get into the meat and potatoes of the story. You see, the General has been looking for a specific map that leads to a place called Verdant. A map that Delta and Asher both have branded to their backs.
Life is harsh in this world, but it's even harder for those visited by raiders, or sold to work for the General. He controls Bedrock, a cache of weapons, and a source of water used to grow crops. To consolidate his power, he rules with fear, guns and drugged water, turning laborers into mindless drones. Children aren't taught anything but how to fight or harvest; if they spontaneously know how to read or any other skill, they're "gods touched" and given a place of respect.
There are plenty of interesting characters in this book as well a curious places like Powder Town where the women create their own explosives. The author hits on a bit of the Old World, and what apparently happened. The tale of Verdant haunts everyone, the hope for a life with water, greenery, and relative ease compared to the desert and dried up ocean beds. Delta transforms from a disgruntled older teenager who hates having been stuck with a baby that isn't hers, into a determined, fierce heroine who would do anything to save Bay.
The worldbuilding comes about so organically. We're treated to descriptions of the landscape, sure, but then pieces of the history are woven into the prose and dialogue as naturally as could be. There's no shortage of action in any of the four parts in which the book was split up. Wind-wagons, falcons, hybrid “Old World” guns and new, this book had a wide variety of tools to pull you in. It is fair to say that I have read almost everything the author has written. From the Taken trilogy, to the Vengeance Road duology, to the Contagion duology. It's apparent that the author has a curious mind that can create strange and interesting new worlds. I look forward to seeing what comes next.