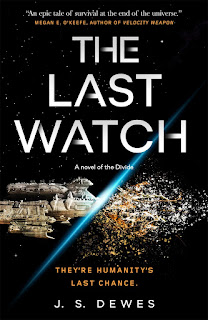 The Expanse meets Game of Thrones in J. S. Dewes' fast-paced, sf adventure where a handful of soldiers stand between humanity and annihilation.

It’s the edge of the universe.

Now it’s collapsing—and taking everyone and everything with it.

The only ones who can stop it are the Sentinels—the recruits, exiles, and court-martialed dregs of the military.

At the Divide, Adequin Rake commands the Argus. She has no resources, no comms—nothing, except for the soldiers that no one wanted. Her ace in the hole could be Cavalon Mercer--genius, asshole, and exiled prince who nuked his grandfather's genetic facility for “reasons.”

"Sentinel, Sentinel at the black, do not blink or turn your back. You must stand ready to stem the tide, lest Viators come to cross the divide.

The Last Watch is the first installment in author J.S. Dewes The Divide series. Imagine the soldiers of the Night's Watch from Game of Thrones, faced with the high stakes politicking and interstellar action of The Expanse, and you'll begin to get the flavor of the first entry in the Divide series. Dewes uses her flair for the dramatic to stack twist after twist, compounded by epic space-battles fought by uniquely compelling characters like Cavalon Augustus Mercer II, and Excubitor Adequin Rake. Adequin, the Commander of the Argus, is a Titan--one of the elite special operation soldiers during the last war against the Viator's. Titans are legendary heroes and Rake was one of the best known along with her partner Griffith Bach.
Adequin has been a fighter pilot, tactician, and marks-woman. So why has she been relegated to the edge of the Divide? I'll not spoil the entire reason except to say that Five years ago, she made a life or death choice that sent her to the farthest reaches of the universe so that nobody would discover what she did. To make matters worse, The Argus is ancient and is falling apart. The Sentinels stationed onboard the Argus are a mixed bag that have some problematic reason for their posting: hacking, disobeying an order, lack of respect for officers, etc.. One could say that Adequin is captain of a ship filled with criminals. Including one very special one. Cavalon is an outcast royal heir who has been stripped of his titles and sent to the Divide and the SCS Argus.
All of his alleged offenses have been redacted and he was lucky to keep his own name. What crime did Cavalon commit that would get him sent to a military battle-cruiser on the edge of the Divide? A very creative one. Cavalon nuked his grandfather’s genetic labs trying to stem his grandfather's machinations. When he's not being a smartass, he's brilliant with a list of advanced degrees that come in handy time and time again. He's also the only one onboard without any military training. The Sentinels at the Divide are allegedly protecting mankind from another Viator incident. Except they died out two hundred years ago. Had to clean up a few during the so called Resurgence War that led to the discovery that the Viators created a race of beings called Drudgers.
Some may not believe in coincidences, but shortly after Cav's arrival, the Divide does some wanky things which forces Rake and a hand full of her crew to abandon ship. What's even more disturbing is that the crew has no communications back to civilization. They are literally cut off. They have jump stations that are deactivated. They have Drudgers who show up at unusual places, and with no way to return back to civilization, Rake and her crew must make a stand to prevent the Divide and Drudgers from killing any more Sentinels who have been stranded by their own people. What's curious about this world is that Humans have chosen to borrow, as it were, technology from their hated enemies called Imprints. Rake's are very curious and above anything you will see from any other character in this book.
There is another group in this book as well called Savants. The Savants received intellect, grace, and an appearance that is alien yet not frightening. They were also slaves to the Viators. Cavalon starts out a jerk who thinks the world is against him, but what he needs is Rake. She challenges him to be better and gives him structure and he responds in big ways. There is mild romance in this story basically on two characters Rake and Bach. There is also plenty of darkness, plenty of deaths, and plenty of action to keep everyone satisfied right to the final page of the book. I liked this story so much that I requested the sequel which will be releasing later this summer.