#Review - Girls with Rebel Souls by Suzanne Young #YA #SYFY 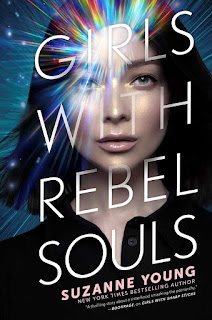 The girls make their final stand in this third and final novel in the thrilling, subversive near-future series from New York Times bestselling author Suzanne Young about a girls-only private school that is far more than it appears to be.

There is no one who can save your rebel soul…

The girls of Innovations Academy escaped the confines of their unethical school, fought against the system protecting predators who targeted girls for harassment, and they’re not done yet. They’re still not free.

Reeling from one revelation after the next, Mena and her friends begin to unwind the truth of their existence and, as a result, their destiny. The men from Innovations Corporation still hunt them, the woman who created them still wants control over them, and worst of all, Mena realizes that through all her pain, all her tears, the world of men has not changed. There is no more time to hope for the best. The girls know they are in a battle for their lives, a war for their very existence.

The girls of Innovations Academy have sharpened their sticks to fight back, they have fought for justice with blood from their razor hearts. And now, the girls will choose their true nature...and how they define their rebel souls.

Girls with Rebel Souls, by author Suzanne Young, is the third and final installment in the authors Girls with Sharp Sticks trilogy. It’s been a few weeks since Mena and the other girls of Innovations Academy Marcella, Brynn, Annalise, and Sydney, escaped their elite boarding school. Although traumatized by the violence and experimentations that occurred there, Mena discovered that the outside world can be just as unwelcoming and cruel. With no one else to turn to, the girls only have each other—and the revenge-fueled desire to shut down the corporation that imprisoned them.

Coming to terms with the fact that they are AI, created by men to be controlled and dominated by men, they are devastated and shell shocked. The girls now have one goal in mind, revenge. But, they are also trying to learn about the school's investors so they can destroy them. Can there be a decent person underneath when there's so much cruelty and malice towards a group of people? The closer the girls get to their freedoms and revenge, the more unexpected things become and soon they don't know who to trust and who is on their side.

Mena's job starts in Colorado while her sisters end up in New York and Oregon hunting down investors. But when she and Jackson arrive at the former Innovations School, they find the school destroyed, and the town empty. It is a ghost town. To make matters worse, Jackson's father is apparently one of the investors in Innovations School but he's no longer around to explain hit side of the story since someone beat Mena to him first. To make matters worse, the girls are on edge because they have a kill switch implanted in their brains.

We've learned previously that Leandra was a double agent of sorts. She's just like Mena and her sisters. Leandra has an agenda yes, but nobody should make a mistake and trust Rosemarie. Rosemarie made an adjustment to Lennon Rose's brain that takes away emotions like fear and guilt. So, in the end, she allows Lennon Rose to basically do whatever she wants to do with men who she believes got away with abuse towards girls in various schools. This includes doing a lobotomies which have dire consequences for those who have had them.

I'm going to say this for the benefit of everyone. The author is a radical feminist with an agenda who truly believes that women don't have the same rights as men do. I call hog wash. The author started with a fictitious law called the Essential Women's Act. That would never happen in our society. There are too many women in positions of power that will never allow that to happen. As someone nearing 60 years old, I have never been told I can't do something I wanted to do. Nobody has ever told me that I can't work the job that I wanted to work. Nobody has ever tried to prevent me from voting.

Nobody has ever paid me less than a man for the same job. In fact, more times than not, I've been paid higher wages than certain men. In other words, fiction based alternative realities like this series, definitely belong in the Science Fiction genre. In this series, there are two men, Jackson and Quinn who have been there from the beginning. Not once have they treated Mena and her friends with anything less than respect and kindness. Jackson has been hobbling along with a broken leg for part of the first story, all of the second, into this story.