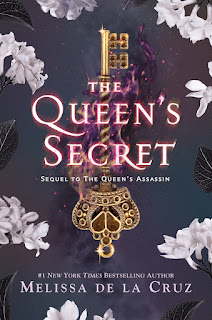 Lilac’s birthright makes her the Queen of Renovia, and a forced marriage made her the Queen of Montrice. But being a ruler does not mean making the rules. For Lilac, taking the throne means giving up the opportunity to be with love of her life, the kingdom’s assassin, Caledon Holt.

Worse, Cal is forced to leave the castle when a horrific set of magical attacks threatens Lilac’s sovereignty. Now Cal and Lilac will have to battle dark forces separately, even though being together is the only thing that’s ever saved them.

In the riveting conclusion to Melissa De La Cruz’s fantasy duet, love and magic are at war, and victory rests on a knife’s edge.

The Queen's Secret is the second and final installment in author Melissa de la Cruz's The Queen's Secret duology. Lilac is the princess of Renovia by birth, and the queen of Stavin from her marriage to King Hansen. But her heart belongs to Caledon Holt, an assassin sworn to protect the queen. For awhile Hansen and Lilac have an arrangement. They are married in name only, and each has lovers in secret thus the name of the book. But after a series of strange events begins occurring in the kingdom of Stavin and Lilac is called a Renovian witch, Hansen decides it is time for them to stand together as a unit, and produce an heir to unite their kingdoms.
It is feared that the Aphrasians have returned and that Lilac is in league with them. Lilac and Hansen's marriage is one of political expedience not based on love. He keeps many different women in his bed chamber but gets angry when Lilac does the same with Cal. But in order to keep things normal, the Small Council suggest that Lilac have as many heirs as she can to strengthen the marriage. When an attack on Lilac mother Lilianna happens, Lilac and Cal must race to figure out who is behind them before it is too late. With Rhema and Janden alongside, Cal isn't alone in his investigation while Lilac is all about a prisoner in her home even though she has been trained to take care of herself.
Why the rating you ask? Simple: I was a bit disappointed with the overall plot of The Queen's Secret and the lack of any real development in the relationship between Shadow/Lilac and Cal. The two main characters spent more time arguing and fighting and jealous of the other. Other times Cal was intentionally sent elsewhere to not be around Lilac. Many of us have asked the same question? What happened to the strong, warrior we met in The Queen's Assassin who was the reason that many of us chose to finish this series?
Another issue, nothing interesting happened until I was 75% into the book. I realized that I could skip pages at a time, and not really miss any information. Sad. Also, the big conflict with the Aphrasians and the mystery behind who was involved in the the attacks on Queen Lilianna and tertiary characters who were part of Lilac's circle. The conflict was resolved in four single pages. It felt extremely anticlimactic, and honestly a little rushed. There was a lot going on with the storyline, and a lot of the plot just seemed like fluff.

In the far north of the Kingdom of Montrice, winter arrives early once more. The mellow days of autumn are over, the fruits of the harvest hastily packed into granaries and cellars, cured meat dangle from oak rafters. The fields are empty apart from golden bales of hay ready to be transported to stables and stacked high in barns. This far north, they are accustomed to snow.

So when a blizzard swirls in before the trees have shed their last leaves, no one gives it much thought at first. For three days the wind howls and snow falls in frigid ropes. In the village of Stur, snow piles so high that tunnels must be dug to allow doors to open, and every family wakes to darkness, their houses packed in snowdrifts. At last, when the blizzard passes, they climb out to find snow heaped on rooftops, clogging chimneys, and encrusting wells.

The village elders say that Stur has never seen so much snow, not in living memory. It makes them uneasy about the winter that lies ahead. But the snow has transformed the muddy streets and plowed fields into a sparkling white wonderland. After the children of Stur finish their morning’s work, they gather to play on snowy banks, creating makeshift sleds by lashing branches together. The village rings with the happy shouts of children tumbling down hillsides and jumping into drifts.

The pond is covered by thick white ice; its surface is the face of the moon. A dog skids across the ice, barking with surprise, and some of the children decide to try skating, something they’ve heard about but never experienced. They hurry to strip bark from the birch trees around the pond and strap it to their boots with ribbons of leather. The bravest go out first, soaring across the ice, laughing when they lose their balance and sprawl across its hard, slippery sheen. Soon the village children play on the frozen pond.

A crash of thunder sounds, splintering the calm of the afternoon. A dark cloud moves across the wintry blue sky so the snow no longer glints in the sun. Some of the children look up, hoping for more snow.

But no more snow falls. Not one crystal snowflake. Thunder crashes again, so loud the nearby houses shake. Lightning cracks open the sky and ink-black fingers shoot across the pond’s surface, staining the ice with veins of ebony. The same black ripples from the hillsides to the banks surrounding the pond, and outward to the snowbound streets of the village.

Along these ominous fault lines, ice begins to crack. Snow melts as suddenly as it fell. Torrents of freezing water pour down the hills, and Stur’s main street is transformed into an icy river, sweeping people and animals into its freezing surge. With a thunderous crack, the frozen pond splinters and the children sink into the frigid water, screaming and thrashing. As the hills above churn with cold water, the pond becomes a drain, drawing everything—and everyone—into its icy whirlpool.

When the dark cloud passes, all evidence of snow has disappeared. All that remains are soggy fields, bare hillsides, and streets thick with sludge. The village pond is still, its bright moon face gone. The villagers who survived the deluge rush to its banks, and there, through a thin layer of frost, delicate as a spider’s web, lie the frozen bodies of the children, their faces distorted with terror.

By the time the messenger rides out to the capital of Mont, he is reminded to report that of all the day’s strange and horrifying events, there is one detail that is so curious that it must not be overlooked.

The layer of frost across the pond was not gray, or even dirty white, the usual color. It was the color of fresh spring lilacs.