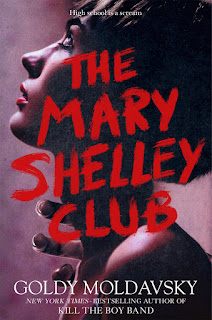 New girl Rachel Chavez is eager to make a fresh start at Manchester Prep. But as one of the few scholarship kids, Rachel struggles to fit in, and when she gets caught up in a prank gone awry, she ends up with more enemies than friends.

To her surprise, however, the prank attracts the attention of the Mary Shelley Club, a secret club of students with one objective: come up with the scariest prank to orchestrate real fear. But as the pranks escalate, the competition turns cutthroat and takes on a life of its own.

When the tables are turned and someone targets the club itself, Rachel must track down the real-life monster in their midst . . . even if it means finally confronting the dark secrets from her past.

When it comes to horror movies, the rules are clear:

1. Avoid abandoned buildings, warehouses, and cabins at all times. 2. Stay together: don't split up, not even just to "check something out." 3. If there's a murderer on the loose, do not make out with anyone.

But what about real life?

Goldy Moldavsky's Mary Shelley Club begins with 16-year-old Rachel Chavez being attacked by two masked men in her home. After escaping with a move that will haunt her forever, Rachel begins her own sort of therapy by watching every horror movie that you could imagine. One year later, Rachel and her mother have moved to NYC where she is attending Manchester Prep where her mother is a teacher. She feels out of place in this new elite world, but she makes one good friend, Saundra, who tries hard to get Rachel out and socializing.

After Rachel is blamed for a prank gone wrong, she learns about a mysterious "Mary Shelley Club" and is very intrigued since she loves horror movies. Kids in the school are often overheard saying that dirt rat got me! It is apparent that this super secret club is on the same level as urban legends. Soon thereafter, Rachel finds herself as a new member of this Mary Shelley Club and finds out that the number one goal is to scare people.  Each member, Freddie Martinez, Thayer Turner, Felicity Chu, and Bram Wilding, has what's called a "fear test."

The club even has its own set of rules which each member is bound to adhere to. They each have to identify a target and the rest of the group plays along with the scene that is played out for that target. The goal is to make their targets scream. The game isn't over until everyone has their turn. When the pranks start to go wrong, and it seems as if someone is trying to prank the club using their own plans against them, can Rachel find a way to leave the club behind her? For this book, each character's Fear Test gets their own chapter which is something different than other stories.

Although Rachel does some pretty twisted, horror-inspired things throughout the novel, the reader knows that most of it is fueled by her need for catharsis, and she still displays enough empathy and self-doubt to be likable. The fast-moving plot keeps you on the edge of your seat from the opening scene to the very last page. I had a bit of difficulty with the ending and here's why. Rachel learns a bunch of new things thanks to Bram. Instead of wondering if Rachel will ever be able to walk away from her past, the story just ends. I loathe open ended books but the overall story wasn't that bad. Just call Rachel the Last Girl.