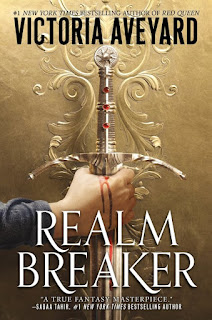 A strange darkness grows in Allward.

Even Corayne an-Amarat can feel it, tucked away in her small town at the edge of the sea.

She soon discovers the truth: She is the last of an ancient lineage—and the last hope to save the world from destruction. But she won’t be alone. Even as darkness falls, she is joined by a band of unlikely companions:

A squire, forced to choose between home and honor.
An immortal, avenging a broken promise.
An assassin, exiled and bloodthirsty.
An ancient sorceress, whose riddles hide an eerie foresight.
A forger with a secret past.
A bounty hunter with a score to settle.

Together they stand against a vicious opponent, invincible and determined to burn all kingdoms to ash, and an army unlike anything the realm has ever witnessed.

Realm Breaker is the first installment in author Victoria Aveyard's new trilogy by the same name. If you've watched or read Lords of the Rings, this series should be for you. This story is packed with action, betrayal, and twists you won't see coming. It is an epic fantasy novel with a rather large cast of characters. The story begins with Andry Trelland who is a squire in the service to a knight who has joined a group called the companions of the realm. The companions quickly find themselves outnumber and massacred by one of the main villains of the story who is looking to tear open the realm to his master and allow all sorts of dangerous creatures to enter the world.
Corayne an-Amarat aka the smuggler's daughter is the second character introduced. Corayne's mother Meliz an-Amarat is a pirate who trusts her daughter's well being to others while she's kept Cora's father's name a secret. Corayne has always dreamed of the sea, of seeking the horizon, but her mother has always said no. After meeting with Dom and Sorasa, Corayne learns that her father was one of those who was lost his life in the battle at the beginning of this book. A father that she never met but somehow she is expected to be the last remaining descendant of his bloodline and wield his spindleblade. No pressure!
Domacridhan of Iona is an immortal or Vederan trying to avenge a broken promise. He, like Andry, was at the massacre at the beginning of this story and is only alive because he is immortal. Until Dom meets with Corayne, his only ally is Princess Ridha of Iona who goes on her own quest hoping to find allies to help Dom against the villains of this story. Dom realizes that Cora is like her father, restless and searching for something. Meanwhile, Dom's people are cowards and their only focus is finding a way home to Glorian which has been cut off from them.
Sorasa Sarn is an assassin of the Amhara, legend of the shadows, who has been exiled by her Lord Mercury. After meeting with Dom, Sorasa helps him search for any remaining Cor blood mortals who remain. The sons and daughters of Cor are all but extinct. Except for two. One of them being Corayne and the other being her diabolical and evil uncle Taristan. Sorasa has a rather large target that she is trying to avoid. She's made plenty of enemies, but has the skill set to survive and escape from most places.
Erida is Queen of Galland. After her knights were massacred leaving only Andry to live, Erida doesn't believe the story that Andry claims happens. She makes it known that everything she does is for power, including marrying the villain of this series and trying to stop Corayne and her group from being successful in shuttering the spindles which have unleashed armies of beings that haven't been seen in ages.
Valtik is the strangest character in Corayne's allies. She's the sorceress who uses twisted riddles to get her message across. She's the one who advises Sorasa that the quest needs seven people to be successful. Trelland is a forger with a secret past. Sigil is a a bounty hunter with a score to settle. The team of seven is the only force that stands between the invincible Taristan and his mission to conquer all worlds and watch them burn. Taristan recruits some formidable allies that make the company's mission to stop them seem insurmountable.
Realm Breaker is set in a world called Allward that, at one time, was the crossroads for travel between other worlds. The portals that were used by travelers are called spindles. Once upon a time, Cora's ancestors were spindleborn, children of a lost realm who are slowly dying out. One of the repercussions of losing the spindles is that there are groups of people in the Aveyard’s world who actually came from another world, and are cut off from their ancestral home, who age differently that regular humans. Elders or Vedera are considered immortal in Allward, although it is quickly established that an Elder can receive sufficient damage to be killed. We see a lot of different countries and kingdoms through out the book, from deserts to green oceans to stinking cities.
As with the authors previous trilogy, the author leaves this story on a cliffhanger. If everything goes well, the next books will release over the next 2 years.