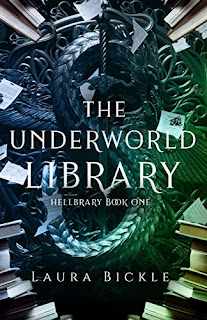 Whoever possesses the Great Library of the Underworld rules Hell itself…and threatens the destiny of both the Heavens and Earth.

The Great Library contains the most deadly magic tomes penned since the beginning of time. This magic is both wondrous and terrible, kept under lock and key by witch-librarians serving the king of the Underworld.

Eve is one of those faithful librarians. She doesn’t recall her life prior to the Hellbrary, and unlike her fellow Hellbrarians, she has very little magic to speak of. When a dangerous book is stolen, she must recover it with the help of a Gorgon librarian, a hellhound, and a mysterious shapeshifting royal envoy. This daemon, Azarr, has a serpent tongue and the heart of a man – can he be trusted?

King Caldrius’s court has fallen under siege. Caldrius’s cruel son, Ral, has returned from exile with an army to assassinate his father. But his father’s crown alone does not guarantee Ral the throne. He needs the library, and he will take it by force. His ambitions don’t end with the Hellbrary – he means to take Earth and the Heavens beyond.

Eve knows there’s only one way to defeat Ral: they must use the recovered book to awaken the Queen of the Witches. Caldrius imprisoned Viridia millennia ago when she grew too powerful to control. Then, he offered the witches a choice: serve him or die. They served, until now…but will awakening Viridia summon an evil greater than Ral?

Time is running out, and all the forces the Underworld must unite to wage war for the library and control of all of existence.

The Underworld Library, by author Laura Bickle, is the first installment in the authors Hellbrary series. The story begins with Ral, Prince of the Dark Palace, son of Caldrius, King of the Underworld, in a place called Nothingness or the Salt Desert where men and women from Earth end up after they die. Ral was sent there as a punishment because he is pure evil. Now, he has a plan. His plan begins by escaping from the Hatyx Sisters (Hate, Fear, and Wrath) then making an alliance with the Cix and the Blood Ilk who may have access to a powerful weapon called the Spark.

If he can convince the Cix (who are basically vampires) of his intentions of removing Caldrius and taking his place, then find a weapon of unbelievable power, he will have a near unstoppable army behind him to remove his family from power and take the Great Library and its immense power for himself.

Eve Douglass has been working at the Great Library of Hell (Hellbrary) which was created by Caldrius for 2 years. Unlike her colleagues, she has no memories of the before. She only has bits and pieces and memory flashes that she tends to write down so that she can attempt to put the pieces together. She has two cats who she can understand. Yes, the Hellbrarians are able to speak to animals and nearly every other language including Akkadian.

Eve's friends and colleagues at the Hellbrary include Volach, who does a really good impression of being a good dog, Meissa's, gargoyles who all have the same names, Sotris, her boss, and Stanna, who by all indications could be Medusa with her 3 snakes. She's also a witch. There is some suggestion that something bad happened to Eve or that she was a witch or that someone too her memories away because of something that happened before the Underworld.

Things get hairy when a demon named Azarr, daemon to Caldrius, shows up with a badly burned messenger moth with a message that the library needs to retrieve a dangerous book immediately. Normally, the Overdue Book Collection Squad is sent out on the most dangerous missions to retrieve books. But not this time. There are very few books not in the custody of the Great Library. Most are controlled by the Library in the Heavens, and there are only a handful lost in between. The Book of Dreams is one of them.

After learning about the dangerous book, Caldrius tasks Azarr to join the quest to retrieve the book and bring it back to Special Collections. If he is successful, he will be freed from his millennia service to the King. Eve, Azarr, Volach, and Stanna go on a risky mission to collect the book, only to be thrown into a war to save the Library from Ral and his allies.

Princess Thalla of the Dark Palace is the youngest daughter of Caldrius. She was born without the ability to speak. Instead she talks through a raven called Eco who is connected to her. Thalla hates Tal but she loves her older brother Gerint who treats her with respect and not a play thing to be tortured. Her mother, Llythria, Queen of the Heavens was lured away by Caldrius. But Thalla's world is tipped upside down with Ral and his Cix attack the Dark Palace leaves her as the only survivor.

This story ends on a wild cliffhanger ending with witches joining in the battle against Ral and the Cix including a woman who was put to sleep by Caldrius, Viridia. There are so many questions that need to be answered starting with how Eve ended up in the Underworld, and what really happened to her that she is unable to remember her time before she came here 2 years ago. There is also Thalla to think about and no, I am not a fan of spoilers. She, unfortunately, only has one ally, and that person has his own story to tell. If I had to give a brief summary of this book, I'd say legends and myths come together in one place to fight to save a Library that is under attack by a evil villain who has no care about how many people he destroys.