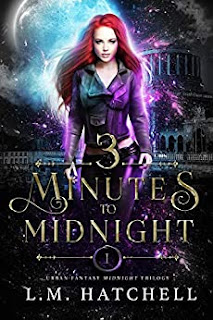 … holds the key to humanity’s survival.

Who will learn its secret?

Half vampire, half fae, Phoenix is an abomination in the eyes of the supernatural community. Screw them! She’s more than happy to play human in the cosy Irish pub she calls home.

At least until an annoying werewolf comes knocking.

Because Phoenix may be done with the supernatural world, but it’s not quite done with her.

Her birth has triggered a prophecy, and now the clock is ticking. Humanity will be the first to suffer for her existence.

Everything, and everyone, she loves is in danger, and as the body count rises Phoenix must learn to embrace the darkest parts of herself.

Or lose it all.

3 Minutes to Midnight is the first installment in author L.M. Hatchell's Midnight Trilogy. This story really has three main characters. Phoenix Crawford, Ethan, and Il Maestro. The story itself is set in Dublin, Ireland where Phoenix, who is a fae/vampire hybrid, works at a local bar with her best friend Abi who just happens to be human. Phoenix isn't supposed to exist which may or may not explain what happened to her parents and why they all but disappeared. Phoenix believes it was because they broke the law by having her which is explicitly forbidden.

Phoenix mere existence is a danger to the status-quo, not only is she considered an abomination but sanctioned by the Council as a crime punishable by death. After her parents disappeared, Phoenix was raised in Darius's vampire coven where she didn't see the light of day for years until she escaped 4 years ago. Phoenix, unlike Ethan, has no clue about her part in the alleged prophecy which is supposed to take place because of her. She has no clue about the Horsemen, or the Blood sacrifice, or the Full moon which will trigger the prophecy and end all humans on Earth.

Ethan is a werewolf who left his own pack to track down the vampires who killed his best friend Sean as well as finding the prophecy girl who is fated to destroy the human world. Ethan has put together a team that includes a vampire, a shifter and two witches. If they find the hybrid, they need to kill her in order to stop the end of the world. For Il Maestro, you can definitely put in him the evil villain category but he also has a bit of a surprise awaiting readers as to who he is in relation to Phoenix and her parents.

I think this story overall was entertaining for the most part. There are still questions, obviously, about Phoenix and the so called prophecy and whether or not she and Ethan will be able to stop the Horsemen from gaining traction on Earth. Phoenix didn't always make the right calls but she was for the most part, sheltered from the world by her uncle. She has some awesome abilities that she needs to learn how to control without being under duress.

Ethan is an interesting character in that he's literally the heir to his pack who chose to do his own thing. He continues to lose people but his focus remains firm in stopping the prophecy. I liked that even though Abi was a human, she wasn't scared away by events that she just happened to get caught up on thanks to Maestro and others. The ending caught my attention and not because it was in any shape a good thing. It was pure devastation and pure heroic on certain characters part.