#Review - Rule of Wolves by Leigh Bardugo #YA #Fantasy 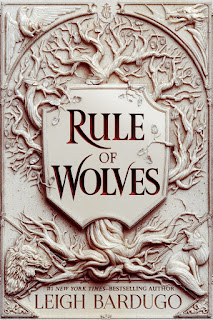 The wolves are circling. And Ravka's time is running out.

The Demon King. As Fjerda's massive army prepares to invade, Nikolai Lantsov will summon every bit of his ingenuity and charm—and even the monster within—to win this fight. But a dark threat looms that cannot be defeated by a young king's gift for the impossible.

The Stormwitch. Zoya Nazyalensky has lost too much to war. She saw her mentor die and her worst enemy resurrected, and she refuses to bury another friend. Now duty demands she embrace her powers to become the weapon her country needs. No matter the cost.

The Queen of Mourning. Deep undercover, Nina Zenik risks discovery and death as she wages war on Fjerda from inside its capital. But her desire for revenge may cost her country its chance at freedom and Nina the chance to heal her grieving heart.

King. General. Spy. Together they must find a way to forge a future in the darkness. Or watch a nation fall.

Rule of Wolves is the second installment in the King of Scars Duology, and the seventh installment in author Leigh Bardugo's Grishaverse. Once again, the story focuses on three main characters: Zoya Nazyalensky, Nikolai Lantsov, and Nina Zenik with one other narrative which I'll not spoil since many of you have already read the ending to King of Scars. As I am apparently the latest victim to write my review for this book, I shall do my best not to repeat what has already been written. There are some interesting appearances in this book.

Especially since they really don't bring anything exceptional to the table. They will and always will be Alina, Darkling, and Mal and just a brief appearance in this story doesn't actually help or hinder the story. As with King of Scars, more than half of the book orbits around Zoya and for very good reason. Zoya is now one with the dragon and the spirit of Juris which makes her the most powerful character in this story. What's interesting about Zoya, is that we finally get an understanding of her past, and how she came to the Darkling and later help Alina

Nina is still in Fjerda with Hanne who has become her world. No, that's not a slight at their relationship. Nina has gotten past the loss of Matthias Helvar, and now it's time to do what's best for her. She is above all, a spy who wants to destroy her nemesis once and for all. Meanwhile, Nikolai once again gets pushed behind Nina for the second most storyline. The one positive is that Nikolai has accepted his demon, doesn't give two craps what anyone else thinks about what he's become as long as Zoya is next to him. He tries to keep his people safe, but knows that a miracle will need to happen so that Ravka doesn't fall. I would also LOVE to see him return permanently to his Strumhond personality that was awesome.

This story has almost everything. A wedding, but not between who you think, a war with massive casualties, a shocking and unnecessary death, a blight that ravages almost all the countries in this universe, an an open ended cliffhanger. Yes, you heard me, this story, even though it's part of a duology, leaves readers with a cliffhanger ending which apparently will go back to the Six of Crows crew (Kaz, Wylan and Jesper) which makes an appearance, as well as Inej who has become something of a badass. While I'm not a fan of the cliffhanger, I do believe that the final chapters were just what fans of Grishaverse asked for.