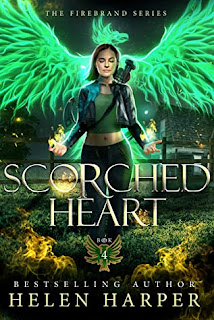 My parents were brutally murdered when I was five years old. Their killer has spent the last twenty five years in prison for his terrible crimes - but I still have unanswered questions. After all, I am the phoenix. When I die, I am reborn in fire and brimstone. It happens again and again and again. I have no idea where my strange ability came from and nobody to ask.

Now another shocking murder has been committed in the small village where my parents died and there is evidence which suggests the killer is supernatural. The crime gives me the perfect reason to return to my childhood home. I can offer my expertise as a Supe Squad detective - and seek the truth behind what I really am.

Scorched Heart is the fourth installment in author Helen Harper's Firebrand series. After being told by her supervisor to take a vacation after a very public case which lots of people learned of her secret, Detective Constable Emma Bellamy knows that this might be the perfect opportunity to find out where her unique powers came from. For Emma, this case is personal. 25 years ago, her parents were murdered and she somehow survived. Since learning that she is the Phoenix who grows stronger every time she dies, this case might actually answer some important questions as to why she was chosen, and why her parents were murdered.

From traveling to Her Majesty's Prison Galloway to visit the man who was convicted of murdering her parents, to traveling back to her childhood home where apparently a rogue supernatural has committed murder, answers might not be as easily found as Emma believes. The more she asks questions the more dangerous it gets for the whole town. The town knows who she is and is pretty reluctant to welcome her with open arms fearing they will be next.

When she is taken by surprise and wakes up 12 hours later, she knows that she has rattled someone's chains and it is only a matter of time before they try again. After another body appears, and suspects remain allusive, it appears that Emma is prey instead of the hunter. With only Lord Lucas Horvath along to watch her back in case anyone tries to kill her, it's only a matter of time before the killer will need to do something even more drastic to get Emma right where they want her.

Emma has a whole lot of blanks to fill in when it comes to answering the questions as to how she managed to survive when her parents weren't as lucky. As the answers to her questions are finally filled in, the danger isn't finished, and the book ends on a wallop. So, fair is fair, this was a pretty good story, but not as action packed as Midnight Smoke. The mystery as to who was involved was pretty apparent; for the most part. I was able to figure out one of the villains because he was very public and always around. Readers are introduced to yet a new supernatural outside of the usual vampires, werewolves, ghouls, pixies, gremlins, and satyr's that have already been introduced.