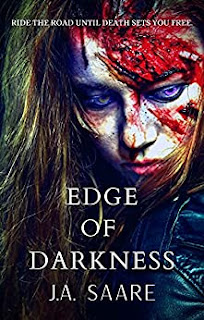 Ride the road until death sets you free.

Rhiannon Murphy fled New York following the horrific events that ended the lives of those she loved. In the months that have passed, she and her vampire lover, Gabriel Trevellian, have pooled their talents to kill half-demons that have ruled the vampire world for centuries. On the brink of regaining control, they learn things are not so simple.

Marigold Vesta is no longer content in Hell. Due to the terms of an agreed-upon bargain, the fallen angel is preparing Rhiannon's body for early possession. If that's not bad enough, Lucifer is aware of the trade and wants Rhiannon's soul.

The only option is to turn to Bane, an arms dealer who offered Gabriel an alliance to recapture the city. The man isn't human and has a personal connection to Rhiannon. When she learns why the deadly being entered her life, she must decide to ride the edge of darkness or bask in the glory of the light.

With the clock ticking, every choice counts.

Rhiannon's Law #43: If you're going to put your foot down, really put it down. You choose the itinerary when going through life. Once you give your planner to someone else, it's sayonara, bitch.

Edge of Darkness, by author J.A. Saare, is the fourth installment in the authors Rhiannon's Law series. This book picks approximately 5 months after The Ripple Effect. The first thing I ought to say is that I am happy that the author didn't give up on this series even with all of her personal ups and downs. Even though it took 10 years to finish and release this story, the wait was definitely worth the time. I do recommend that you have some clue as to what has happened to Rhiannon since this story began. Thus, with perhaps mild spoilers, let's summarize. In the beginning, Rhiannon Murphy left Miami in the middle of the night not telling anyone where she was going.

Rhiannon lost her parents and her best friend in ways that will shatter your heart. She ended up in NYC. A bartender by trade, a loud mouth by choice, and a necromancer by chance; she managed to keep her nifty talent hidden from those around her until she mistakenly spoke to a ghost. Later, she met Gabriel Trevillian aka Disco who is a Master vampire of New York who bound her to him like the rest of his family. A master vampire who has been battling against powerful people like Revenald Bhevencourt and Marius who took Rhiannon's sister and is Gabriel's maker to rid the state of half demons.

Rhiannon not only has the ability to see dead people, but to communicate with them, and raise them from the dead as well. She has another friend, Ethan McDaniel aka Goose, who is also a necromancer she relies on for help since she's had no official training. Rhiannon ended in the future, and what she saw, she's trying hard to make sure it never happens. Ever. 101 years into the future, New York City is a wasteland. Humans are scarce. Vampires are the dominate race, and humans are offering themselves up as blood slaves, immortality, money, and survival. It's a completely different world, with new, powerful creatures inhabiting it.

Unfortunately, Rhiannon lost her friend Payne in the previous installment. His death was a stunning move by the author, but she wasn't done yet. She also made a deal with a fallen angel named Marigold Vesta who has come close to taking over Rhiannon's body permanently. Marigold’s amulet gives Rhiannon awesome new abilities, and power. It also appears to allow her to heal faster, which is good, since she ends up a bloody mess more times than not. If that weren't bad enough, Rhiannon needs to deal with her new ally and arms dealer Bane who one could say that he's both light and dark, good and bad, and claims kinship with her.

Even though he is clearly a mystery, he might be the one person who is able to find Marigold in time to prevent her from becoming Lucifer's play toy. One of the more interesting aspects of this series are Rhiannon's Laws which are interspersed throughout the book.

Rhiannon's Law #61: Life sucks for everyone, and misery doesn't give free passes. Even on your most fucked day, it's important to remember that you never know what someone else is dealing with until you walk a mile in their shoes.

There are those who say that this story reminds them of the Anita Blake series. As I abandoned that series years ago, and don't ever plan on going back, I can't answer that question. I will say that the author shocked the hell out of me with the ending to this story. My only hope and prayers is that she can write quickly and put out a fifth installment sooner, rather than later.