#Review - Blessed Monsters by Emily A. Duncan #YA #Fantasy 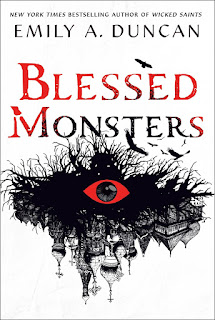 The girl, the monster, the prince, the queen.

They broke the world.

And some things can never be undone.

In Emily A. Duncan’s Blessed Monsters, they must unite once more to fight the dark chaos they've unleashed—but is it already too late?

The startling conclusion to the instant New York Times bestselling Something Dark and Holy trilogy.

Blessed Monsters, by author Emily A Duncan, is the third and final installment in the authors Something Dark and Holy trilogy. Once again, the story revolves around three main characters: Malachiasz Czechowicz, Nadezhda Lapteva, and Serefin Meleski. The story picks up a few weeks following the cliffhanger ending of Ruthless Gods. Serefin and Nadya are plagued by their regrets and grief at what happened in the previous story. The very fabric of the world has been altered, fallen Gods have risen, the universe has titled on its axis, and all seems to be lost. But can it be saved?
Malachiasz, who has defeated death many times over, and been betrayed just as many times, is attempting to hang on to whatever is left of his humanity while being ridden by a long banished God. The eldritch gods have been freed and are ready to take of the world. Malachiasz is alone and struggling to fight the ancient god who has possessed him and is intent on destroying the world. His path will sink him deeper into depravity where not even Nadya can reach him.
Nadya is struggling with the darkness that threatens to overtake her. She has a contaminated hand that she tries to cover up. One of her Gods was killed, and the rest of the pantheon has gone silent. There is a whole new revelation when it comes to Nadya and the Gods which I won't spoil. Even though she previously lost her connection to her Gods, the Gods haven't finished with her yet. Especially the fallen Gods who see her as their way to re-enter the world and destroy it.
Serefin has lost his position as King, he's lost an eye, he's free of a certain God, but his relationship with Kacper may be his saving grace. Serefin is struggling to be the king his people need in order to bring about peace, but there may be one person who may be able to finally put war in the past once and for all. Parijahan is finally opening up, and embracing her true nature, and revealing her secrets. Let's not forget about Pelegeya who is still short with answers, and long with expectations that there will be four who must come together in order to save the world.
The girl, the monster, the prince, and the queen. Yekaterina Vodyanova has decided that she will hitch her fate to Nadya no matter what happens. Readers finally get a better understanding of who Parijahan is and why she's been reluctant to return home. Unfortunately, there's many jumps, too many times when what happened went unsaid and left me a bit confused. Compared to Ruthless Gods, I don't think this finale was as strong as it could be. That said, not everything was wrapped up in a neat little bow. War between countries was still a possibility, and there were (mortal) adversaries that hadn’t been dealt with.
Apparently, I haven't spent a whole lot of time on the internet. That allegedly blatant anti-Semitism in this trilogy apparently went completely over my head except. Malachiasz was actually supposed to be some kind of negative, evil, Jewish caricature. Malachiasz is obviously a Darkling substitute. Furthermore, the Tranavanian cult called the Vultures may also bring to mind an association with modern-day Neo-Nazi conspiracies about secret so-called "cabals" of Jewish people running shadow governments around the world. It always saddens me when authors of books I love turn out to be hateful people.
Over the past 10 years, we've had a slew of authors who have crossed the line. Although the author allegedly apologized, I don't believe we need to have anyone, let alone an author, needs to be a bigot or intolerant or others. Legitimately, I could have lowered my rating.