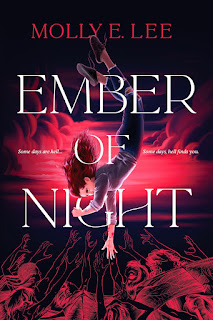 Perfect for fans of Hush Hush, this epic angels-and-demons YA series combines all the best tropes of the genre: pulse-pounding romance, epic worldbuilding, and plenty of twists and turns.

Harley Locke is no stranger to darkness, but when the irresistibly hot and broody new guy crashes into her world, she isn't sure she'll survive him.

She has days before she turns 18 and can take her kid-sister and escape their volatile home life, and she'll do anything to protect her—including accepting her supernatural heritage that has every demon in Chicago chomping after her rare blood.

Draven Reid has spent the better part of a century searching for the Key to opening the Gates of Hell so he can rescue his wrongfully imprisoned twin brother, and he's prepared to shed blood to do it. But soon the person he's prepared his whole life to kill turns out to be the one person who makes him feel alive.

Dodging an abusive father, demons prepared to drain her dry, and a newly formed love that may be the death of her, Harley will have to decide on her own what's worth saving: the world that has done nothing but chew her up and spit her out, or the boy whose stolen her heart, but has a blade with her name on it.

Ember of Night is the first installment in author Molly E. Lee's Ember of Night series. Harley Ward is counting the days until she turns 18 and can leave the unhappy home she shares with her little sister and abusive father. Harley hides her bruises from her boss at work, her best friend Kai, while training in Krav Maga with her High School Coach Hale. Thanks to working full time at Nathan's Deli, she's slowly saved up enough money to finally be able to put a down payment on her own place.
One could say that the relationship between Harley and her sister Ray is the most beautiful thing you will find about this story. She literally stands in the path of pain just so Ray doesn't get in the way of her father's abuse. Then she meets Draven. As the story opens, Draven, it seems, has been sent to stop the apocalypse and Harley is fated to play a key role in it. Draven believes that Harley is the Key, something ancient and powerful, which will soon surface and create major chaos.
The prologue gives us a bit of insight to who and what Draven actually is, and let’s just say, he’s not human. The first thing he notices about Harley is that she's wound up tight and is hyper aware of her surroundings. Even with her alleged best friend Kai around, Harley is not the kind of girl who needs saving. She plans to save herself and her sister from whatever comes their way. When unexplained things start happening with mysterious beings seeming to have it out for Harley, she faces the tough decisions of whether she'll be the hunter or the prey.
Normal human beings don't notice the minions of Hell, so why can Harley? What makes her so special that every sort of Demon imaginable wants to sip of her blood? Could Harley be the answer to a major demons plans to escape from Hell? And, what part will Draven play when all is said and done? Harley's journey is quite a struggle. There are people around her who actually care, and there are those who are using her to get what they want.
As I stated above, the most beautiful part of this story is how protective and driven Harley is to protect Ray from danger. Even though they are half sisters, Ray is special. She's an artist who Harley helps get into a special school. She writes manga which is pretty impressive. And, she truly believes Harley is a super heroine. Unfortunately for Harley, she has a tough, hard road ahead of herself after that freaking ending and a betrayal that you could see coming from Pluto. The publisher and author have plans to release the second installment later this year. How many books in the series? Unknown.