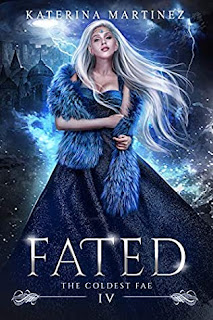 To save Arcadia, I must fly into the heart of the storm

There's a prophecy that the white wolf will save Arcadia from the clutches of a terrible storm.

I am the white wolf, but even I'm having trouble believing the prophecy.

The former Prince Radulf is meant to be dead, but he's not. His spirit has taken possession of Prince Cillian's body, and if that wasn't bad enough, whatever soul bond the Prince and I had is gone.

The only way to re-forge my bond with the Prince is to win the Royal Selection, but the city of Windhelm thinks I'm a murderer, and may outright kill me as soon as I walk through their gates.

It's a chance I'm going to have to take, because if I fail, then it won't just be Arcadia that falls, but so will Earth once the armies of winter come crashing through portals like avalanches.

Fated, by author Katerina Martinez, is the fourth and final installment in the authors The Coldest Fae series. Dahlia decides to return to Windhelm in order to save Prince Cillian who has been possessed by his brother Rudolf. In order to save Cillian, however, she must do her best to win the Royal Selection competition. A competition which will test her new skills as the White Wolf, and whether or not she's the one who can stop the Veridian from bringing along the dreaded Wenlow with it. The issue? She's still wanted for murder.

As Dahlia arrives, she learns that there are 6 girls remaining for the Selection including her nemesis Mareen who is odds on favorite to win thanks to the Royals and Council being on her side. Because the Council believes she's guilty of murder, she's restricted to her room, and watched over by a being called a Ulhan which is supposed to keep her in line. Dahlia quickly learns that there is something really, really wrong at Windhelm, and that the Veridian is using its dark influence to hold Dahlia back from actually winning.

What's more, Rudolf actually doesn't seem like a villain, but a man who was thrust into a bad situation not of his doing. What's lost in the shuffle, is the new allies that Dahlia made in the previous book are missing. You could say that all but two of them vanish and are not seen until the end of the story. Another bad thing is that the three women who helped raise Dahlia, are also all but forgotten except when they want to blackmail Dahlia into behaving or else.

While there is enough action, betrayal, suspense, and romance to satisfy, the ending seems forced, quick and lacking. It would have been a great series if the last book of the series was written with more details.