#Review - King of Scars by Leigh Bardugo #YA #Fantasy 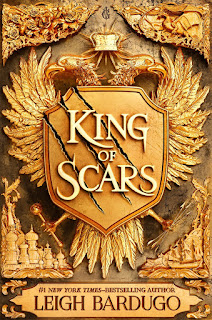 Face your demons... or feed them.

The boy king. The war hero. The prince with a demon curled inside his heart. Nikolai Lantsov has always had a gift for the impossible. The people of Ravka don't know what he endured in their bloody civil war and he intends to keep it that way. Yet with each day a dark magic within him grows stronger, threatening to destroy all he has built.

Zoya Nazyalensky has devoted her life to honing her deadly talents and rebuilding the Grisha army. Despite their magical gifts, Zoya knows the Grisha cannot survive without Ravka as a place of sanctuary—and Ravka cannot survive a weakened king. Zoya will stop at nothing to help Nikolai secure the throne, but she also has new enemies to conquer in the battle to come.

Far north, Nina Zenik wages her own kind of war against the people who would see the Grisha wiped from the earth forever. Burdened by grief and a terrifying power, Nina must face the pain of her past if she has any hope of defeating the dangers that await her on the ice.

Ravka's king. Ravka's general. Ravka's spy. They will journey past the boundaries of science and superstition, of magic and faith, and risk everything to save a broken nation. But some secrets aren't meant to stay buried, and some wounds aren't meant to heal.

King of Scars is the first installment in Leigh Bardugo's King of Scars Duology. King of Scars splits perspectives between three main characters – Zoya, Nina and Nikolai. If you haven’t read the Shadow and Bone trilogy or the Six Of Crows duology, you'll likely find yourself asking about possible spoilers in my review. Sorry! The Grishaverse spans the Shadow and Bone Trilogy, the Six of Crows Duology, and The Language of Thorns—with more to come. The story takes place 3 years after the events in Ruin and Rising. The country of Revka is still in crisis and now they’re on the verge of a new civil war which could destroy them.

Nikolai Lantsov is trying to restore the former glory of Ravka but not many people are willing to follow a young King who some believe is illegitimate. He might’ve survived the war, and the torture at the hands of the Darkling, but he’s still battling the darkness that is starting to grow stronger with each day. People are still fearful of Grisha and are capturing and killing them regularly. Grisha are also still becoming addicted to jurda parem, and many different variations of it, which enhances their powers but at a cost. Nikolai and Zoya travel back to the Fold where bad things happened, but perhaps they can find an answer to curing Nikolai of his darkness.

"Nikolai had always understood that he and Ravka were the same. He just hadn’t understood how: He was not the crying child or even the drowning man. He was the forever soldier, eternally at war, unable to ever lay down his arms and heal"

Nina Zenik, along with Adrik, and Leoni, is on a secret mission to Fjerda to help emigrant Grisha's who’re confused about their powers. She knows very well the dangers of parem, and what it does to Grisha. If you forgot who Nina is, she's a legendary Grisha, a heart render, and an unrepentant killer twisted by parem. She who would love to get revenge on Jarl Brum and his Grisha witch hunt. Nina is taunted with phantoms of the beloved dead. She meets someone who may play a huge part in her future; a Grisha living in secret keeping her abilities hidden from her own family.

Zoya Nazyalensky has devoted her life to honing her deadly talents and rebuilding the Grisha army. Despite their magical gifts, Zoya knows the Grisha cannot survive without Ravka as a place of sanctuary—and Ravka cannot survive a weakened king. Zoya will stop at nothing to help Nikolai secure the throne, but she also has new enemies to conquer in the battle to come. Zoya is one of the strongest Grisha's ever (Squaller, of the Etherealki Order) and is an incredible fighter and leader. She was also the Darkling’s favorite until she chose to help Alina. Zoya is a character who does not trust in love, and seeing her consider letting someone back in was heart-wrenching. Zoya and Nikolai meet three new characters who I shan't spoil since they play a huge part in what happens to Zoya and her amazing new powers.

Some other names you'll likely recognize play important parts in this story: Genya Safin used to be the servant to the Queen, and was treated so very terribly. She is much happier now, but still is living with the torture that the Darkling inflicted upon her. David Kostyk is a very skilled Fabrikator who helped make things to hold amplifiers. Tolya Yul-Bataar & Tamar Kir-Bataar are Twin Grisha's who help guard Nikolai. Isaak is the common solider who will impersonate Nikolai while he is away with a young Priest named Yuri who is part of the cult known as Cult of the Starless who pray to the Darkling.

My favorite character is Zoya. Nina has a long road ahead of her, while Nikolai apparently is being left behind. If you are wondering why so many of us are talking about the ending, read the book! If you thought you had issues with the Six of Crows duology, just wait! I dare say that it was a shocking way to the end book. Thankfully, this series is a duology and you won't have to wait for long; Especially if you read the books together!