#Review - A Grimoire for Gamblers by Amanda Creiglow #Fantasy 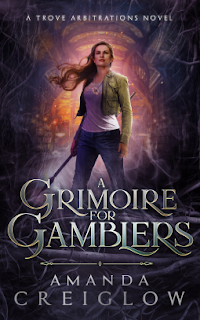 Magic may be secret, but it’ll kill you anyway.

But uncovering her father’s secrets could be the only way Elizabeth can stop a string of suspicious suicides… if the local wizard doesn’t rip the memories out of her mind, first.

A Grimoire for Gamblers is the first installment in author Amanda Creiglow's The Trove Arbitrations series. The main character of the story is Elizabeth Baker. Elizabeth is dealing with the fact that her father just recently died. He had mental issues for years and made it known that everything he owned should be burned to the ground. No reason left behind for the request. Needless to say, Elizabeth ignored his request and it was deemed unenforceable. In this world, there is no such thing as a coincidence.

After going through his things, she finds a mysterious box, as well as train set that has been running non-stop for at least 8 years. Elizabeth’s father had always been an eccentric man with his model trains and other hobbies, but when she finally gets up the gumption to go into the attic she finds a trove of evidence. Evidence that magic is real. When the train tips over, there's a real train derailment in her town, but thankfully, no one was hurt. Elizabeth is thrown into a world of magic, deals, and dangers beyond comprehension.

After returning to work after a bereavement leave, she encounters a stranger (Troll) who gives her an envelope claiming that the contents are hers. When Elizabeth opens the envelope, she uncovers a mystery of dead bodies left behind all 3 days after the first one. The first one being her father. To make matters more intriguing, a warlock named Maxwell Jones shows up unannounced and tries to remove all of Elizabeth's memories which doesn't work. Elizabeth later meets Gigi who takes her to a demon gambling ring with humans betting their souls, and learns that her father's magical classes make things that more curiouser.

Like Alice jumping into the rabbit hole, Elizabeth isn't one to shy away from getting the answers she needs. Even though Max is clearly trying to side track Elizabeth from getting in deeper than she already is, she knows that Max may be her only friend when it comes to uncovering what happened to her father, and those who have died since his suicide. Max is both foe and friend depending on the circumstances and when Elizabeth is forced to face her own reckoning in a life or death battle, she will have to use whatever moxie she can conjure up in order to survive another day.

The reasoning behind my rating is the lack of they boyfriend in the book. Elizabeth allegedly has a boyfriend named Faisel. Faisel, it seems, is always traveling and missed nearly the entirety of what happens to Elizabeth and the fact that it seems as though she will become a human arbitrator for the supernatural world which includes demons and trolls and others that haven't been revealed as of yet.