#Review - The Serpent's Curse by Lisa Maxwell #YA #Fantasy #Historical 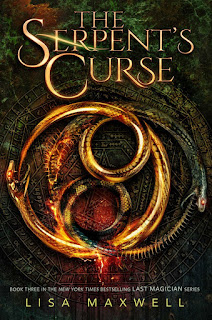 Evade the Serpent.
Heed the Curse.
Rewrite the Present.

Esta isn’t a stranger to high-stakes heists. She’s a seasoned thief who has no reservations about using her affinity for time to give her an edge, and she’s trained her whole life for one mission: travel back to 1902 New York, steal the ancient Book of Mysteries, and use its power to destroy the Brink and free the Mageus from the Order’s control.

But the Book held a danger that no one anticipated—Seshat, an angry goddess was trapped within its pages. Now that terrible power lives within Harte, and if given the chance, Seshat will use Esta to destroy the world and take her revenge.

Only Esta and Harte stand in her way.

Yet in their search to recover the elemental stones needed to bind Seshat’s power, Esta and Harte have found themselves stranded in time with a continent between them. As Esta fights to get back to Harte, the Order is no longer the only obstacle standing in her way.

Saving Harte—and magic itself—will put even Esta’s skills to the test. And all the while, another danger grows, one more terrible than both Seshat and the Order combined...

The Serpent's Curse is the third installment in author Lisa Maxwell's The Last Magician series. Key characters in this book are: Esta Filosik, who has the ability to manipulate & travel through time; Harte Darrigan, who is struggling mightily with the Ars Arcana Book being part of his very being and its draw towards Esta. Plus, since the author loves multiple narrations, Jericho Northwood, Maggie, Viola Vaccerelli, Nibsy Lorcan, Jack Grew, Jianyu Lee, Ruby Reynolds, Logan Sullivan, and Cela Johnson.

Esta and Harte continue their journey to find the magical artifacts scattered across the country by Harte. They’re working against the Order, which seems to pop up everywhere they go. Seshat, the goddess whose power lives in Harte and time itself, is a thorn in the side and their may be consequences to come sooner than later. They do have help, of sorts, from Jericho and Maggie who are Antistasi. At certain points, Harte goes his own way and leaves Esta to her own devices. But they eventually reunite in order to continue their war against Jack and his minions.

Esta has learned some hard truths. Her parents were murdered, she was brought to the present where her life was basically stolen and turned into the Devil's Thief. Everything she's known about magic has been a lie. She thought the Book of Mysteries held the key to freeing the Mageus from the Order’s grasp, but the danger within its pages was greater than she ever imagined. With the Egyptian Goddess Seshat attached to Harte and desiring Esta and her abilities, Esta needs to step lively or the goddess will finally get what she's wanted.

Jack is still grappling for power and control within the Order and that storyline of procuring the ring artifact involves so many different players. He also has Thoth eager for revenge against Esta and Seshat. Jack really is a villains villain. He literally is evil no matter what year Esta and Harte manage to show up at. His hatred, or shall we say, Thoth's hatred for those with magic, is legendary. Mageus, people with magic, are marginalized in society and they actually passed a Defense Against Magic Act.

The author has chosen to point out how people of color, Mageus or not, are oppressed. Jianyu is Chinese and Cela is Black; while Viola is an Italian immigrant, also hated during this time, she is still seen as “better” because she has white skin. I can honestly relate to Viola in that my mother's great grandparents came over from Italy in the early 20th century. They were told that they weren't white enough, they weren't black enough, they often fought block to block wars with Irish, and where called many, many obscene crap.

As with other readers/reviewers, I am a big flabbergasted. I honestly thought three books would be enough to circle around and find out the answers to the questions that the author continues to tempt readers with. When I learned this book was 700 pages, plus a fourth book, needless to say I wasn't a happy camper. I didn't want to wait yet again for more of this story and just wanted to get to the ending. This book also relentlessly goes back and forth between 1902, 1904, and now 1920 & 1952 which I was happy to see. I will be even happier when the story returns to the present so that Esta and Jack can resolve their issues once and forever.