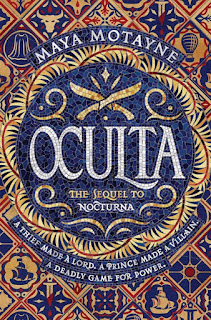 After joining forces to save Castallan from an ancient magical evil, Alfie and Finn haven’t seen each other in months. Alfie is finally ready to take on the mantle of crown prince. His first task: preparing for the peace talks with Castallan’s former colonizers, the nation of Englass.

But when the summit coincides with the reemergence of Los Toros, the mysterious syndicate of assassins responsible for Alfie’s brother’s death, and Finn’s unexpected installation as one of the four Thief Lords of Castallan, the two must reunite to discover the hidden link between these events—before it’s too late.

Oculta is the second installment in author Maya Montayne's A Forgery of Magic series. Set in a Latinx-inspired world, a face-changing thief (Finn Voy) and a risk-taking prince (Prince Alfehr aka Alfie) must once again team up to save Castallano from dual threats to the country. Alfie released an evil's magic killing hundreds of his people. His actions have come at a great cost. Nobody trusts him, and they especially don't appreciate that he intends to go forward with a peace conference with the hated English who once controlled every aspect of Castallano life to honor his brother Dez's wish.

Meanwhile, Finn is back to wearing her own face for the first time in a long time. As a face shifter, she is able to take on the appearance of anyone, and she discovers an even more deadlier ability that may be a game changer. Finn gets back to what she does best; causing trouble. But when she walks into a trap by a person wearing a bull mask, she not only loses the invisibility cloak she was given by Alfie, but she must return to Castallano where she will quickly find out that she's the newest thief lord which comes with more responsibility than she cares for.

As the new heir to the crown, Alfie is trying to mend the relationship between his kingdom and their once colonizers, and this upsets his people. But he has good intentions and no one is truly willing to listen. But thanks to a group called Los Toros, the peace summit may quickly become a disaster. So, we've pretty much established that the Castallano's are Latino's, while the Englassen people are white people are still preventing ordinary people from using magic. After saving Castallan from an ancient evil, Alfie and Finn haven’t spoken in months.

Now they have to figure out a way to once again work together along with Luka to find out who is responsible for all the murders, and who the Los Toros really are. Plot wise, this book has a lot going on, but it doesn’t really feel like it. It’s not all that unpredictable, in fact, it has many twists and turns and shocking surprises, especially the ending. Oculta is a slow boil full of court politics and political intrigue, underscored by political unrest and a slew of crimes stemming from the underworld.