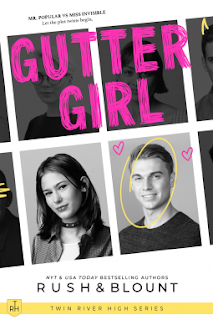 Star football player Jace Rovers has a secret. And not just any secret—a shocking secret… He writes romance. The kind with swords. And dresses. And kissing.

Nobody knows. Not the other kids at Twin River High. Not his overbearing parents. And certainly not the millions of fans who’ve read his book on the writing platform Scribbles. And that’s the way he plans to keep it.

Except suddenly one of the other football players grabs his notebook in jest and starts reading a kissing scene out loud…and Jace knows he’s busted.

But then McKenna Storm, resident goth girl who avoids the spotlight like a virus, snatches up the notebook and tells everyone she's the author. And lucky for Jace, she later agrees to continue the ruse...for a price.

Heck, he'd give her anything not to reveal his secret. But when they start to fall for each other, he knows he'll have to keep the biggest secret of all—his darkest character is based on her…

Gutter Girl, by co-authors Lynn Rush, and Kelly Anne Blount, is the first installment in what's being called the Twin River High series. But don't get fooled. Each these books have a beginning, a middle, and a standalone ending. This first story focuses on two 17-year-old Seniors at Twin River High School. McKenna Storm had her world flipped on its head after her father ran away from Kenna and her mother who is dealing with major health issues. McKenna is known as the goth girl in school because she dresses all in black, and wears different hair coloring like pink.
Jace Storm is a star wide receiver on Twin River H.S. football team. He also has a secret. Jace is an incredibly internet famous and equally anonymous fantasy romance author of a book called Kingdom of Swords which has thousands of fans on what's called Scribbles. No one has a clue what Jace has been up to. Not his family, not his friends, nobody. Until Jace bumps into McKenna, and she ends up with his notebook filled with storyline ideas. When she tries to return it to Jace, instead of letting Jace be outed for being a fantasy romance writer, McKenna takes credit.
McKenna has a bubble that has kept everyone out. The fewer people in your life, the less you can get hurt. McKenna's home life is imploding thanks to her mother's inability to accept responsibility for her condition and her refusal to stay on her meds. Let's not spoil anything further. McKenna works her ass off. She is juggling school, workload, managing a home and hasn't had time to truly be a teen. But after she steps forward and tells the world that she's the author of a popular book, her role of Miss Invisible goes bye bye.
Suddenly, McKenna finds herself working out a deal with Jace, who also happens to be her grade school crush, to keep his identity safe. Jace has often wondered what really happened to McKenna six years ago and why she seem to drop off the cliff and change everything about her. But let's be realistic. Were it not for McKenna's best friend Ernie, who is almost perfect in that he never once turned his back on McKenna. He's been by her side through thick and thin and has always had her back no matter what. When McKenna's star rises, he doesn't fade to black. He supports her no matter what.
Won of the best things I can say about Jace is, "don't judge a book by its cover." While his father pushes Jace to do his bidding, Jace knows what he wants. He wants to attend school for creative writing, and he wants to win the award for best fantasy romance novel on Scribbles. A win would jettison Jace's career to the top of the world and give him a chance to do what he's always dreamed about. Plus, he has an adorable younger sister who he never forgets about. He's there for her every night reading to her and telling her about his plans to what's happening next in his book.
The romance is so awkwardly sweet and pure with a subtle undertone of heat. There are some ups and downs and some miscommunications that leave hurt feelings behind. But it's McKenna who pulls off the biggest surprise of the book, and hell no I am not going to spoil it for you!
Goodreads
Amazon  Barnes & Noble  Kobo