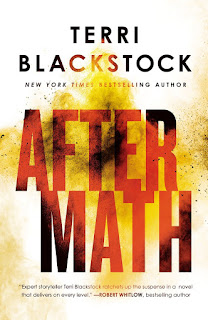 Three best friends are at the venue to hear their favorite band. Only one makes it out alive.

A trunk full of evidence.

When police stop Dustin Webb with a warrant to search his trunk, he knows there’s been a mistake. He’s former military and owns a security firm. But he’s horrified when the officers find explosives, and he can’t fathom how they got there.

An attorney who will risk it all for an old friend.

Criminal attorney Jamie Powell was Dustin’s best friend growing up. They haven’t spoken since he left for basic training, but she’s the first person he thinks of when he’s arrested. Jamie knows she’s putting her career on the line by defending an accused terrorist, but she’d never abandon him. Someone is framing Dustin to take the fall for shocking acts of violence . . . but why?

Author Terri Blackstock's Aftermath is a standalone thriller/mystery with Christian overtones that focus on three main characters. Taylor Reid and her friends are at a concert to benefit a Libertarian celebrity who is running for political office by a band they all love. When a bomb explodes, Taylor finds herself struggling to deal with the results and devastation and loss and ends up going after the man who is alleged to have planted the bombs.

Criminal defense lawyer Jamie Powell has just won a career changing case when she gets a phone call from the one person she hasn't heard from since he enlisted in the military; Dustin Taylor. After an anonymous tip, police stop Dustin Webb to search his trunk. Dustin knows there's been a mistake but cooperates fully. He's former military and owns a security firm GreyWebb Securities with his partner Travis. But he's horrified when the officers find explosives, and he can't fathom how they got there.

The explosives are allegedly the same used at the concert/rally that took dozens of lives including Taylor's friends. Jamie knows she's putting her career on the line by defending an accused terrorist, but she'd never abandon him. Someone is framing Dustin to take the fall for shocking acts of violence, but who and why? Taylor's mental instability understandably worsens following the bombing. She survived. Her friends did not and she has survivor's guilt.

She needs to lash out at whomever is responsible even at the expense of an innocent man. The other issue is that Taylor basically has zero support except for her sister. Where were the parents? Dustin's co-owner Travis is holding on tight to his wife who has terminal cancer. He's hoping that his wife's new experimental therapy will work, but hope is a fleeting thing when it comes to beating cancer. Meanwhile, most everyone else believes Dustin is responsible, including Taylor and his own former foster mother.

Jamie is widowed lawyer and mother of a daughter who she adores more than life itself. She literally goes above and beyond the call of duty to help Dustin who she knows couldn't hurt anyone, let alone be called a domestic terrorist. There are many twists and turns in this book as Jamie and Dustin try to uncover who committed the bombing and the motive. I would like to say that this mystery was pretty good, but it wasn't. It was predictable as was the ending and the impending romance that is rekindled between Jamie and Dustin who were childhood friends.

It's hard not to be emotional at Taylor's loss of her friends. It's also damn hard not to cry when Travis's wife Crystal suffers so badly from cancer that takes away almost 600,000 American lives every single year. No, you didn't read that wrong. 600,000 lives are lost every single year due to cancer. ACS researchers estimate that in the US alone in 2021, almost 1.9 million new cancer cases will be diagnosed. This country needs to do more to cure cancer instead of wasting money on unnecessary pork projects.