#Review - Lies of the Haven by J.A. Curtis #YA #Fantasy 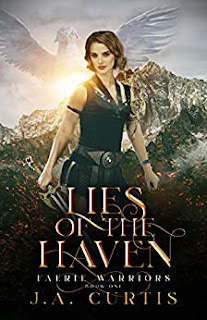 Nothing is as it seems.

Fifteen-year-old Mina didn’t ask to become the center of a feud between two monster wielding, near immortal warriors and their faerie followers. Nor did she ask to be a faerie. Everything changes the night a dragon sends her nana’s home up in flames.

Mina is forced into a life of lies, monsters, and magic. But as she searches for answers that might end the fighting, an enemy threatens Mina and the lives of those she loves.

Lies of the Haven is the first installment in author J.A. Curtis's Faerie Warriors series. 15-year-old Mina is a socially awkward teenager struggling to finish school and coping with her parents decision to confine her grandmother to a nursing home. When they put her grandmother's home up for sale, Mina decides to rebel by throwing a party. Unfortunately for Mina, her party doesn't go exactly as planned. After a boy with a blood red dragon tattoo shows up, along with a girl with a large tattoo of a man with a sword, things really get twisted.

Needless to say that Mina's party is a complete failure when the boy and girl as well as two others boys arrive and begin fighting. Nana's home is completely destroyed and Mina finds herself thrust into a magical world where faeries have monstrous companions, and a war has been fought between two factions for years. They came from the Otherworld, living in the seclusion of the mountains. Somehow, they managed to go undetected by humans despite their hatred for one another and their powerful faerie guardians occasionally locked in mortal combat.

Mina finds herself at the Haven where a woman named Nuada seems to be in charge while Arius is her second in command. According to Arius, Mina, as well as almost everyone else, fell 15 years ago during a battle royal. The only ones who didn't fall were Nuada and a man named Margus. As Mina searches for answers that might end the fighting between the faerie factions, she uncovers an enemy who threatens everything she has begun to care for. Mina has to decide if she truly believes that she's either the Fallen Queen, or her General, as well as choosing between brothers Arius and Dramian.

Lies of the Haven does have a system of magic, and the author explains how it works. Mina is an interesting character, but she has a hard road ahead of her deciding which side is really the good or the bad, or are they both the same and have been brainwashed into believing everything is upside down. Mina has to find out who she is. Is she the queen or the general? Through visions she receives, she slowly starts to see that the brother she’s trusted, Arius, could potentially be following someone willing to betray them all and that Dramian isn't the villain she's been told he was.

With the battle at the end of the book, as well as the revelation as to who Mina really is, it has made it easy to choose to read the next book in the series sooner rather than later.