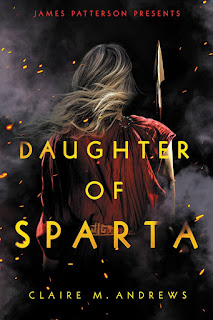 In this thrilling reimagining of ancient Greek mythology, a headstrong girl does whatever it takes to rise up and become the most powerful fighter her people have ever seen.

Seventeen-year-old Daphne has spent her entire life honing her body and mind into that of a warrior, hoping to be accepted by the unyielding people of ancient Sparta. But an unexpected encounter with the goddess Artemis—who holds Daphne's brother's fate in her hands—upends the life she's worked so hard to build. Nine mysterious items have been stolen from Mount Olympus and if Daphne cannot find them, the gods' waning powers will fade away, the mortal world will descend into chaos, and her brother's life will be forfeit.

Guided by Artemis's twin—the handsome and entirely-too-self-assured god Apollo—Daphne's journey will take her from the labyrinth of the Minotaur to the riddle-spinning Sphinx of Thebes, team her up with mythological legends such as Theseus and Hippolyta of the Amazons, and pit her against the gods themselves.

A reinterpretation of the classic Greek myth of Daphne and Apollo, Daughter of Sparta by debut author Claire Andrews turns the traditionally male-dominated mythology we know into a heart-pounding and empowering female-led adventure.

Daughter of Sparta, by author Claire M. Andrews, is the first installment in the authors Daughter of Sparta series. The classic character of Daphne is reinterpreted as a compellingly capable Sparta warrior able to hold her own in a fight. The romantic tension and enemies-to-lovers development between Daphne and Apollo is an ever-present slow burn build up woven into a fast-paced action-heavy plot. While Daughter of Sparta stands on it's own, the book ends with the potential for future books in a series, with several questions left up in the air.

“A warrior has no time to spare worrying about dresses, I would say. Now, as Lykou and Theseus both eyes me with open admiration, I recognize that there is a different kind of strength in embracing your femininity and the vulnerability that comes with it. Dresses can be a weapon, too, a blade of cloth to turn heads and guide eyes, to influence the decisions of others.”
In the original tale of Daphne and Apollo, Daphne was said to be a beautiful nymph whose beauty caught the eye of Apollo, god of archery, music and dance, truth and prophecy, healing and diseases, the Sun and light, poetry, and more. It is said that Daphne was the first love of Apollo but unfortunately the girl never responded his love. It was not usual or possible for a nymph or a mortal woman in the Greek mythology to resist to the love of a god, but Daphne did so and in fact, she lost her life trying to escape this love.
In this version, Daphne is a young woman living with her two brothers Pyrrhus and Alkaios and adoptive parents in Sparta after being abandoned by their father. She's considered to be an mothakes, or a non-spartan who is not allowed as many liberties as true-Spartans are. Daphne has spent her life training and fighting, hoping to one day be seen as something more than a mothakes. When she has the opportunity to take her brother's place in a ceremonial race to catch a stag and bring the gods favor and good harvest to the land, she decides to go with it, hoping that she might gain status and recognition.
Daphne finds herself coming face to face with Artemis, Goddess of the Hunt. Artemis is the daughter of Zeus and Leto, and the twin sister of Apollo. She is charged by Artemis with recovering nine items of power whose loss from Olympus threatens the power of the gods and the fate of the entire world. The message is clear; Daphne must go on a quest to find the missing 9 objects or her brother Pyrrhus and friend Lykou will remain stuck as a deer and a wolf. To make matters even more challenging, Artemis uses the Midas Curse to ensure her compliance as well as sending Apollo along. If she fails to complete the quest, she will be bound and enslaved by Artemis. And as her guide and companion, she's accompanied by Artemis's devious and handsome twin brother, the god Apollo.
Daphne’s sense of isolation and of not being fully embraced by the Spartans is clear from the first pages, and her need to belong propels many of her actions. Daphne is tough-as-nails fighter with some hidden magic about her as well who never hesitates to throw herself headfirst into danger. Daphne's mysterious parentage and assorted godlike abilities was never revealed which begs for a sequel. This book is full of action and ancient Greek myths and legends. It's fast-paced, and our heroes barely have the time to catch their breath before another problem appears. They are either fighting monsters or trying to escape them, or solving riddles and or battling gods.
This book is a literal who's who of Greek Gods and Goddesses and other players. The King of Sparta is Menelaus and his wife is Helen. If you remember your mythology, Helen was stolen away from Menelaus which led to the Trojan War. In this story, Helen was once the fastest Sparta female which Daphne herself is attempting to follow in her footsteps. Others not necessarily how they appear: Artemis and Apollo: Ares: Hermes: Demeter: Minos: King of Crete. Pasiphae:  Ariadne: Minotaur: The Nine Muses are goddesses of the art and the sources of all knowledge. They are also the caretakers of Hesperides, the source of all the power of Olympus.