#Review - The Chariot at Dusk by Swati Teerdhala #YA #Fantasy 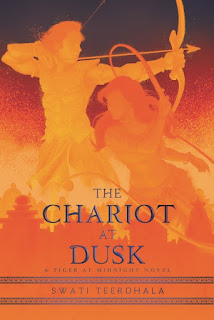 In the sweeping, dramatic third book and denouement of Swati Teerdhala’s South Indian–inspired fantasy trilogy, Esha must hunt down Kunal and work alongside him and Harun in a race to collect ancient artifacts to help save their fragile kingdom after the magical bond between their people, the land, and the gods finally shatters.

A queen at last. An empty palace. A kingdom to save.

Esha is reeling from Kunal’s betrayal, but she has a kingdom to rule from behind a thin smokescreen—pretending to be Princess Reha while she sends her most trusted soldiers to collect Reha and Kunal by any means necessary. Traitors, after all, must be punished.

But the Yavar are attacking from every front—tracking down Kunal and Reha in the remote mountains, kidnapping Harun—in search of legendary artifacts that will give them the power to break the precarious janma bond and release the destructive magic back into the lands.

Now that the race is on to find the missing artifacts, Esha must put aside her rage and work with Kunal again—but can she find the strength to forgive him, or will the Viper have her revenge at any cost?

In the final book of Swati Teerdhala’s epic fantasy trilogy, the lands’ fate, their people’s livelihoods, and the bond that sustains their world all depend on what Kunal and Esha can offer—to the gods and to each other.

The Chariot at Dusk, by author Swati Teerdhala, is the third and final installment in the authors Tiger at Midnight trilogy. Drawing inspiration from ancient Indian history and Hindu mythology, Teerdhala creates a fresh, layered world that is vivid and compelling. The destroyed janma bond, an essential element of the land that was broken by the division of the regions during the violence, demonstrates how the health of the land is intricately related to the actions of its people. Readers loved the cat-and-mouse game of Book One with Kunal attempting to capture Esha.

In Book Two, Kunal and Esha were finally working together in the castle. But with Kunal’s betrayal at the end of the second book, they’re once again on different sides—and Esha must track down Kunal before he costs them their whole mission. Though they find themselves on opposite sides once more, readers will be pleased to see the steamy chemistry between them never fades. This story shows Esha stepping forward from her role as the shadowed assassin to take on the power and responsibility of a temporary ruler, while Reha shows strength by resisting the role of queen until she can accept it on her own terms.

But Yamini, the Yavar Princess, continues to attack from every front—tracking down Kunal and Reha in the remote mountains, kidnapping Harun—in search of legendary artifacts that will give them the power to break the precarious janma bond and release the destructive magic back into the lands. At the same time, Vardaan has gathered his own troops and mercenaries to retake the kingdom. It seems as if they are fighting from all sides, all while trying to decipher the old scrolls and messages that may lead them to being able to fix the janma bond.

Now that the race is on to find the missing artifacts, Esha must put aside her rage away and work with Kunal again—but can she find the strength to forgive him, or will the Viper have her revenge at any cost? The push and pull between the two after the events of Archer was super interesting to follow, and allowed for some really raw moments between the two. The book alternates between Esha and Kunal. Kunal’s chapters where he was so focused on winning Esha back and helping Reha learn her heritage. Esha's chapters prove that you can take the girl out of the assassin, but when you do, there's more to her than meets the eye. She really stands up and delivers as she's pulled together both Blades and Spirits in order to help save their country.

One final comment, I am happy that the revolving love triangle involving Esha, Kunal, and Harun resolved itself way before the finale. Do I think the finale was rushed? Maybe just a little bit. I am glad that Reha was patient in her determination not to jump into becoming Queen before she was ready. This showed a lot of character growth. I liked the group of friends that Esha has put together including Kunal, Laksh, Zhyani, Aripya, Farhan, and Aahal among others.