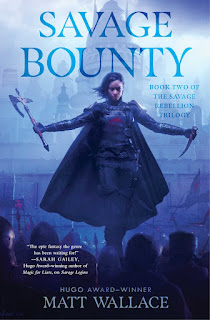 The sequel to the acclaimed, spellbinding epic fantasy Savage Legion by Hugo Award–winning author Matt Wallace about a utopian city with a dark secret…and the underdogs who will expose it—or die trying.

The empire relies on them. The greatest weapon they ever developed. Culled from the streets of their cities, they take the ones no one will miss and throw them, by the thousands, at the empire’s enemies. If they live, they fight again. If they die, well, there are always more.

Savage Bounty, by author Matt Wallace, is the second installment in the authors Savage Rebellion trilogy. This story revolves around FOUR characters: Dyeawan, Evie, Lexi, and Taru. Dyeawan works for the Planning Cadre and just recently became its leader. Evie is the leader of the Savage rebellion who was sent to find Brio, the husband of Lexi. Lexi Xia is a Gen who is up to her eyes in trouble from the moment this story begins, to the moment it ends. Taru was Lexi's protector until kidnapped and forced into joining the Savages.

The story itself is set in a fictional place called Crache. Crache was once a nation led by nobility like England. But, centuries ago, the nation underwent a revolution that put committees and cooperatives ("Gens") in charge of society. Everyone is supposed to contribute and share resources. The Aegins keep the peace. The Planning Cadre comes up with new technologies. The Gens provide all necessary services. But nothing is a good as it seems.

There are people living in the Bottoms who are struggling to survive. Many have been rounded up for small crimes, or no crimes at all, and are never seen again. These people end up becoming Savages and fighting wars. One of the main core storylines of this story is rebellion. Evie, not her real name but a name she chose not to expose herself into revealing her connection to Brio, is a leader, a general, a brutal fighter who has been in numerous bad situations and managed to survive. But with greater forces pushing to put the rebellion down, Evie's forces will be lucky to survive.

Dyeawan, once called "Slider" because she has no use of her legs, has become a leader. But being a leader isn't easy when you are being challenged by others and threatened by the Protectorate Ministry. The Cadre is split into young and old with the old not willing to offer any compromise to Dyeawan's plans for changes in Crache. Dyeawan is challenged to prove that she is a worthy successor to Edgar. She's forced to face three hard challenges that will push her mind and body to the limits. People need to stop messing with this girl. She may have been found on the streets, but she gobbles up information quickly.

As I said, Lexi's life is in constant turmoil from the moment this story begins, until it ends on shocking cliffhanger. Lexi's husband tried to uncover secrets about the Savages and was taken from her. Her bodyguard Taru, who protected Lexi from assassins, was taken after following a lead that might shed light into Brio's disappearance. The Protectorate has her under constant surveillance, and a larger threat in the form of Lady Burr, a woman trying to bring back the nobility, will push Lexi to the limits.

Lastly is Taru. Taru is an undecided and in this world, that is a huge problem for most people. Because of Taru's connection to Lexi, Taru is kidnapped, and forced into becoming a Savage. But Taru has an interesting side trip that leads them to the only country who has not fallen to the Crache. Taru is hopeful that they can get help from these people and maybe they can arrive in time to help Lexi, and Evie survive what is coming for them.

This book, like the previous one, ends on a cliffhanger. I abhor cliffhangers. The only redeeming quality is that they force the author to address issues he left behind. It's not propaganda to say that every character is in deep trouble as the story ends. I will gladly read the sequel to see who survives and how Wallace wraps up this series.