#Review - These Hollow Vows by Lexi Ryan #YA #Fantasy 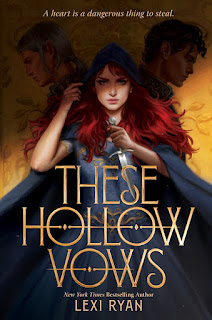 From New York Times best-selling author Lexi Ryan, Cruel Prince meets A Court of Thorns and Roses in this sexy, action-packed fantasy about a girl who is caught between two treacherous faerie courts and their dangerously seductive princes.

Brie hates the Fae and refuses to have anything to do with them, even if that means starving on the street. But when her sister is sold to the sadistic king of the Unseelie court to pay a debt, she'll do whatever it takes to get her back—including making a deal with the king himself to steal three magical relics from the Seelie court.

Gaining unfettered access to the Seelie court is easier said than done. Brie's only choice is to pose as a potential bride for Prince Ronan, and she soon finds herself falling for him. Unwilling to let her heart distract her, she accepts help from a band of Unseelie misfits with their own secret agenda. As Brie spends time with their mysterious leader, Finn, she struggles to resist his seductive charm.

Caught between two dangerous courts, Brie must decide who to trust with her loyalty. And with her heart.

"Once upon a time, a gold faerie princess fell in love with the shadow king, but their kingdoms had battled for hundreds of years and her parents were sworn enemies of the king and his kingdom."

These Hollow Vows, by author Lexi Ryan, is part one of a two part duology. Abriella's (Brie) mother abandoned her and her younger sister Jas 9 years ago. To make matters worse, their uncle passed away shortly thereafter forcing them to live with their horrible aunt and cousins. Brie is bound by a magical contract with no end in sight. By night, Brie is a thief who steals from those who have more than they need in order to pay her bills. By day she cleans and picks up after her ungrateful cousins; kind of like Cinderella and her step sisters.
9 years of living by the rules; don't steal from those who who are honest, don't work for those who try to blackmail you into prostitution, and don't steal from anyone powerful enough to track you down. In this world, Fae pay a premium for young women. Women are bound to the Fae to be exploited and tossed away. People once believed the Fae were guardian angels before the sky split and a portal opened. Only a group known as the Magical Seven of Eldra were capable of stopping the Fae. Brie believes that Fae are demons who exploit, steal babies, and use humans as slaves.
Brie's only bright spot in her life is her neighbor Sebastian who showed up 2 years ago. But things quickly spiral out of control. Brie's last job comes calling and he wants blood which forces her to run. Because of Brie's debts, Jas is sold to into the world of Faerie. Chancing an open invitation by the Seelie Queen to come to Fae where the Prince is trying to find a human bride, Brie gathers all her strength, puts aside her hatred for the fae, and braves this very different world in order to save her sister.
While there, Brie learns that Jas ended up in the hands of the sadistic king of the Unseelie court. When Brie arrives in the Unseelie Court, she finds that in order to get her sister back, Mordeus wants Brie to find and bring back three powerful artifacts that he claims were stolen by the Seelie Queen. To make matters even worse, Brie ends up facing a truth about herself, she has magic, that fae are manipulative bastards who can't be trusted, and the boy she though as Sebastian is not who he claims to be.
I tried to like Ronan/Sebastian, and I did for a while, but somehow I always remained suspicious of him. Something in the back of my mind kept buzzing not to trust him fully. I felt as though he was playing a dangerous game that would end up with Brie in a bad situation. Brie also meets Prince Finnian who seems awfully curious about Brie's magic which leads to all sorts of questions about her own mother and father and what fate they may have met.
❝I am not a pretty thing to be manipulated. I am darkness, and the power rushing through my veins is stronger than ever… with the darkness swirling about the room and my shadows becoming one with it, I feel more alive than I ever have.❞
There are lots of secrets in this book. With the story being told by Brie in the first person, readers learn everything that Brie knows and does and will be there when she's had enough and is ready to bring hell down those who betrayed her. The finale will release in the Spring of 2022.

“I hear you, girl,” Madame Vivias says the second my hand hits the knob for the basement.
I squeeze my eyes shut. I should’ve come in through the cellar door. It’s after midnight, and I have no energy for whatever task she’s planning to give me. Lowering my head, I turn to her and give a brief curtsey. “Good evening, Aunt V.”
“Good evening. Tomorrow’s the full moon.”
“Yes, ma’am.”
“You have my money?”
I keep my gaze leveled on the hand propped on her hip—a sparkling ring on every finger. Any one of those rings could cover this month’s payment. I don’t lift my head. I won’t give her the satisfaction of seeing the fear in my eyes. “I’ll have it tomorrow, ma’am.”
She’s silent for so long that I dare to lift my gaze to hers. She’s adjusting the thick strands of glittering jewels hanging from her neck and scowling at me. “If you don’t have it today, what are the chances you’ll have it tomorrow?”
Not very good. But until it’s officially too late, I won’t admit it. Every time we’re short, our contract grows longer and our payment higher. It’s a vicious cycle we can’t seem to escape. “I’ll pay you tomorrow, ma’am.”
“Abriella!” The shrill cry comes from the stairs, and I have to fight my flinch at my cousin Cassia’s voice. “My dresses need washing!”
“There are fresh dresses in your room,” I say. “I pressed them this morning.”
“None of those will do. I don’t have anything to wear to dinner tomorrow night.”
“My room needs cleaning,” Stella, her sister, says, because gods forbid I do more for one spoiled cousin than the other. “The last time she did it, she barely spent any time in there, and it’s beginning to feel grimy.”
Madame V arches a brow and turns back to me. “You heard them, girl. Get to work.”
Sleep will have to wait a few more hours. I pull back my shoulders and turn toward my cousins’ rooms.