#Review - A Season of Sinister Dreams by Tracy Banghart #YA #Fantasy 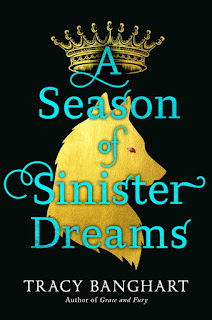 Furyborn meets A Curse So Dark and Lonely in this thrilling fantasy about two powerful girls coming together to protect their beloved kingdom—from the author of Grace and Fury.Annalise may be cousin to the prince, but her past isn't what she claims, and she possesses a magic so powerful it takes all her strength to control it.

Evra is a country girl, and has watched as each friend and family member came into their own magic, while hers remains dormant. But everything changes after Annalise loses control of herself and Evra begins experiencing the debilitating visions of a once-in-a-generation clairvoyant meant to serve the crown.

Thrown together at court, Evra and Annalise find that they have the same goal: to protect their kingdom from the powerful men who are slowly destroying it. But neither is quick to trust the other—Evra's visions suggest a threat to royal rule, and Annalise worries that her darkest secrets will be revealed. Their magic at odds, the young women circle each other, until the truth must come out.
Full of intrigue, romance, and shocking twists, this gorgeously immersive fantasy will keep readers spellbound until the very last page.

A Season of Sinister Dreams, by author Tracy Banghart, has magic in spades, along with the strong female protagonists. YA fantasy titles continue to break out in the market, as evidenced by recent bestsellers like Wicked Saints and A Curse So Dark and Lonely, and this new book from Tracy Banghart will captivate the same audience. The story takes place in a country called Tyne. The King of Tyne tends to grab the most powerful magic users which causes major problems for the villages these men and women are taken from. The only thing that is keeping him alive is by having the best healers around.

The story focuses on two young women; Annalise, and Evra.  Annalise lives in the palace as the niece to King Adler. She hides her powerful magic that threatens to overtake her, as she has vowed for herself and her mother that she will change the way the kingdom is being run if it's the last thing she does. When she is betrothed to a foreign nobleman from Kingdom from the south, her anger lashes out with dangerous consequence.

As she tries to cover up what she's done to Prince Kendrik, she soon learns it has made her the new heir, potentially allowing her to make the changes she is so desperate for - if her secrets are not exposed. One could absolutely called Annalise the villain of this story. She does some Maleficent level villainy towards many different individuals including Evra and her family. However, one also needs to look at her circumstances prior to becoming an entirely new person to keep promises to her mother who sacrificed everything so that she could survive the King's unfair laws.

Evra is a magic less daughter of farmers in a poor village who faces bullying and prejudice from almost everyone, except her best friend Tamsin. Almost everyone is born with magic, including her mother and brothers, though the strength of it varies from person to person. Between the king's taxes and his claiming of everyone of strong magical ability, the village is struggling. They do not have the magic they need to keep their crops alive and protect their houses, and they do not have money to buy it from elsewhere. Soon after Annalise's blow up, Evra starts having visions that mean the kingdom is in danger.

She’s this generations Clearsee. The Clearsee’s only appear once in a generation, and only when the kingdom is in danger. Clearsee's see the future, and the past. Evra must travel to court to meet with the king and inform him that she has been shown. Evra travels with her best friend Tamsin who is the daughter of the village leader and has had the necessary training to actually fit in where they are going. Evra soon finds herself having dreams of a young man, and a wolf. Could the two be the same?

One of the best things that the author did is write the story in first person so that both Annalise and Evra can tell their own stories so that readers can walk in their shoes and understand what is happening around them. For Evra, she never wanted to be in a position of power or a position that would find her at the center of a conspiracy involving Annalise. Thankfully, she had her best friend and even one of her brothers along for the ride. She also finds herself connection to Prince Kendrik which is one of the only romantic moments in the entire book.

A Season of Sinister Dreams is a satisfying standalone novel, which will be refreshing in the crowded series market. A potential light cliffhanger ending, however, sets the stage for additional books if the first does well.