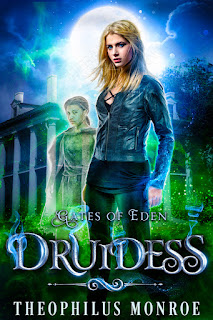 Horrific tales of witchery, necromancy, ghosts, and murder. Joni thought these were myths, preserved by her ancestors in their journals... until the Caplata returned from the grave...

Joni had always been fascinated by the history of her family’s old, antebellum plantation. Her ancestor’s journals were filled with stories, many involving two slave girls, the older of whom was deeply involved in the "red magic" of the Bokors. When Messalina returns from the grave on a quest of vengeance, Joni must confront the wickedness of her own family’s past, while also embracing a truth even more ancient—that she is descended from a line of Druids. Joni is the only one who stands between Messalina and her insidious plans.

Druidess introduces a new, modern fantasy series, that takes readers on a thrilling journey into the world of Celtic and Native American mythology, Voodoo, and an eternal realm where all magic—good and evil alike—has its origins. Druidess is filled with shocking plot twists, compelling characters, and features a strong female hero.

If you liked the way Anne Rice’s Mayfair witches encountered historic evils in The Witching Hour, enjoy stories of ancient demons, mythical characters, wizards, and even zombies then you’ll love Monroe’s debut contemporary fantasy. With a touch of horror, and a compelling journey of discovery into the world of Druid magic, Monroe’s Druidess is sure to keep readers enthralled from start to finish.

One could call Theophilus Monroe's Druidess the beginning to the authors Wadsworth Legacy series of books. The story is set in 2014 Louisiana and ends 3 years later. 14-year old Joni Campbell has always been fascinated by the history of her family’s old, antebellum plantation. Her ancestor’s journals were filled with stories, many involving two slave girls, the older of whom was deeply involved in the "red magic" of the Bokors. Joni is confronted the ghost of one of the slave girls who went missing, Isabella.

Isabella has been told by a Dryad named Lugh that she must warn Joni of the dangers to come, and to guide her though her journey. Isabella tells Joni that her sister, a powerful necromancer named Messalina, is back and looking for revenge against her family. Joni learns that she has the ability to absorb magic, and amplifies that which she absorbs. She's what's called a Dryad siphon. Comes in handy when Messalina attacks Joni's mother.

Joni must confront her family’s past, including her own mothers who has kept quite a secret from Joni all her life. Joni is descended from a long line of Druids but females have a tendency living for long. Joni is joined by Roger Thundershield, a shaman whose family has been working with the Campbell family for centuries. This book ends on a cliffhanger that has to deal with Joni's mother and a person called the Guardian.

The story also provides alternative narratives from Isabella, along with Messalina who were sold to Joni's ancestor Ashbury Campbell back in the middle of the 19th century. For Messalina, the Campbell line is the key to her ability to raise an undead army. Messalina's ally is none other than Baron Samedi, the Guardian of the crossroads.

Apparently, there's other books featuring Joni and Roger. I can't for the life of me figure out which book that would be. There other books featuring characters like Elijah Wadsworth, (Eden, the Druid Legacy) who Joni is supposedly supposed to be connected to, and Annabelle Mulledy (Gates of Eden, Voodoo Legacy) who are introduced later on in the story. After following the authors web page, it appears that in order to actually follow this series, you need to first start with Druid's Dance featuring Elijah.

One could also say that this story was way too young for someone my age. I'm rating this 13-18 as the targeted group. Yes, there are some adults in this story, but the main group is 14 or 15 years olds.