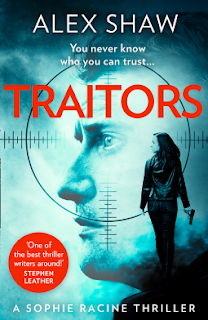 ‘Alex Shaw is one of the best thriller writers around!’ Stephen Leather

A TRAITOR WHO CAN’T BE CAUGHT
French Intelligence officer Sophie Racine is tasked with traveling into the heart of a warzone in Ukraine. Her mission is to assassinate a Russian spy who took the French secret service apart piece by piece and gave their secrets to the Kremlin.

A PRISONER WHO CAN’T BE KILLED
Ex-SAS trooper and MI6 Officer Aidan Snow is also in Ukraine. Sent by British Intelligence, he must extract an innocent citizen caught up in the conflict in rebel-controlled Donetsk.

A WAR THAT CAN’T BE WON
When their missions collide, Snow and Racine find themselves outgunned and outnumbered. Even if they make it out of the warzone alive, danger won’t be far behind…

Perfect for fans of Killing Eve, Chris Ryan, James Deegan and Vince Flynn, this is an explosive action thriller you won’t be able to put down.

Traitors, by author Alex Shaw, is the first installment in the authors Sophie Racine series. Sophie Racine is a highly-skilled assassin who is employed by The General Directorate for External Security (DGSE), a blacks ops unit and part of the French Secret Service bureau of Foreign Intelligence. Known as the Division Action, its mandate included the design and delivery of clandestine and covert operations. The DA specialized in the black arts of sabotage, assassination, detention, and kidnapping, and the infiltration and exfiltration of agents into and out of hostile territory.

The story actually begins 3 months, before in Tunisia. Racine's target is a former paratrooper named Jean Yotte who is now a private contractor who overseas security and babysitting of dignitaries. He's also been known to be an assassin with direct links to terrorists. Racine's own division determined that he should be removed and who is better than Racine to get the job done and they vanish without getting caught? Unfortunately, Racine exposes herself and is forced into hiding.

Three Months Later, a man named Roman walks into DGSE safe house where he is met by Jean Baptiste Moreau who works for the Ukrainian desk. Roman apparently has fresh intelligence on a man called Raduga who not only betrayed the DGSE, but revealed the secret identities of dozens of French undercover agents who were eliminated. Roman spins a web and a story about a man named Mohammed Iqbal who was taken by the DNR rebels backed by Russia as well as a future attack on Paris itself.

For the first time in 8 years, the DGSE has its best leads where to find the traitor named Sasha Vasilev who nearly brought down the organization. The only person capable of getting in and out without getting caught is Racine who, even though she disobeyed orders in Tunis, she saved dozens of tourists. Racine joined the organization because of Vasilev and would love to have a crack at being the person who brought him to justice.

While in the Donetsk People's Republic, Racine runs into Ex-SAS trooper and MI6 Officer Aidan Snow who is a teacher in the Ukraine. British Intelligence wants Snow to extract Mohammed Iqbal who got caught up in the conflict in rebel-controlled Donetsk and Sasha's much larger game. In a weird sort of way, Racine needs Snow in country in order to avoid being caught or captured by the DNR rebels and their Russian financiers. The sooner both can complete their respective jobs, the sooner they can get on the first transport out of country.

This story plays itself out in France, Russia, Donetsk, and Ukraine. This is one of those books that will remind you of Jason Bourne with his unbelievable feats that he somehow manages while getting the job done. Racine is almost inhuman in the way she can manage to get in and out of tight spots. This mission is also highly personal for Racine as she lost someone close to her thanks to Sasha's betrayal. The book ends on a brutal cliffhanger ending and I am eager to pick up where this one left off.

*On a historic note, Donetsk is part of the Ukraine which illegally declared its independence in 2014. They can thank the Russians for their independence as this part of the country was part of Putin's plans to reunite the former USSR under his rule. See Crimea who was invaded in 2014 and separated from Ukraine because of its access to the Black Sea.