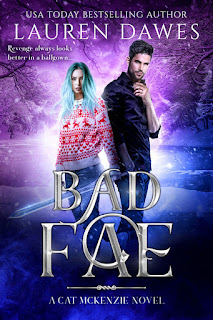 A rookie cop. A team of supernatural detectives. Warring fae queens out for blood.

My name is Cat McKenzie, and I need a vacation.

It’s almost Christmas—my favorite time of the year—at least it would be if it weren’t for the psychotic fae assassin trying to hunt me down and permanently punish me with a dirt-bed for interfering in his plot for revenge.

To top off my Christmas Tree of Crap, I’m still dealing with residual feelings of lust for my incubus partner. Even though I’ve started dating safe, human men, staying away from him is proving too hard.

Japanese water spirits, fae queens and unwanted supernatural visitors… When can I get off this crazy ride?

Bad Fae, by author Lauren Dawes, is the third installment in the authors Cat McKenzie series. Since joining PIG (Paranormal Investigative Group) as human liaison, Cat has lost several trucks, she's faced rogue vampires, zombie cyclops, gremlins, and witches and received a favor from a vampire mistress after riding the city of her nemesis. She's connected to an magical Angel sword named Reaver that appears when she's in trouble, and she wears a mysterious opal necklace that flares to life whenever someone who wants to harm her is around.
Her partner Sawyer, is a sexy demon incubus who feeds on lust and wants to take it to the next level. Her co-worker is a Wendigo, but she's not really sure what Hayliel is. At the end of the prior installment, readers found who the next villain is who Cat and her partner must deal with since it was pretty apparent he wasn't going away. In this case their nemesis it's a psychotic fae assassin named Kailon, but he's just the tip of the iceberg, as it were. While on what she calls a normal date with a human, she ends up facing an assassin.
To top things off, her truck is once again a target. She should just stick to riding Sawyer's motorcycle! To make things more interesting, there's information revealed about Cat's parents who were members of a Rogue faction which hunted supernaturals and a visitor from someone who claims to have known both of Cat's parents. But just when you thought it was safe to go back in the ocean from bull sharks, (oh let's not forget about the Japanese water sprites!) Dawes adds yet another element.
You see, it seems as though the Fae courts are at war and well, it seems as though Cat and her partner may end up being caught up in the middle...again. This means that Cat and Sawyer must travel to Wonderland to not only help Astrid, but to put down a revolt by her sister Avi who knows the origins of the Opal necklace that Cat wears and was given to her by her own father right before he disappeared and never returned.
Honestly? I'm feeling kind of disappointed. 70 % of the book is shenanigans, 20% is Cat and Sawyer dealing with her issues about not wanting a full time relationship with him, and 10% is dealing with a bad fae and queens of the Seelie and Unseelie courts which lasted a minute. I absolutely suggest that readers of this series follow the books as they are released since they are ALL connected. Cat finally admits that she gets snarky whenever she's afraid. Cat also learns what it means to fall in love with an Incubus who only has eyes for you. With the prior installments, you absolutely know what supernatural entity is going to be the next villain for Cat and Sawyer to deal with.