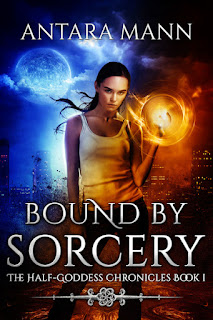 A supernatural apocalypse is coming. To prevent it, I'll have to stop hiding in the shadows.

I may be an elemental mage, but I prefer the quiet life. My occult bookshop barely pays the bills, but it keeps me out of the limelight.

Unfortunately, things in the supernatural community aren't so quiet. When a New York banker is found murdered — with an ancient symbol carved into his chest — the Magic Council wants me to investigate.

But I won't be solving the murder alone. Tensions between gods and demons are heating up, so the Council gives me a partner: a powerful and frustratingly sexy fae.

And as if that weren't enough of a distraction, now someone's trying to kill me...

Bound by Sorcery, by author Antara Mann, is the first installment in the authors Half-Goddess Chronicles. 24-year-old Alexandra Shaw, who is an elemental mage, and her best friend Naomi, who is a hedge witch, run a bookstore in Ivy Hills, Connecticut called The Steaming Cauldron. After doing well since they graduated from Magica Academy, they're not doing too good these days since Desmond Cohen opened Magus World which has cut into their customers. Alex has healing powers whenever the moon is full. She also has a minor ability of reading an objects past.

To add some interesting twists, Alex also has a voice in her head which hasn't been sussed out why, and she carries a long silver blade with runes (Victory & Liberty) inscribed in the blade that was supposedly her mothers who disappeared 7 years ago. After a senior banker is killed in his NYC office with the sign of a long extinct order called the Holy Order of Shadows carved into his chest, Alex finds herself working with her ex Brandon Sax, Carlos Delvalle, and Kagan Griffith, a Fae who is supposed to lead the team in its investigation.

With distrust growing between demons and goddess, Alex and her team need to put aside any differences they may have or hurt feelings from past slights or other secrets that are right under their noses, and find the villain before a war breaks loose between the Courts of Heaven and Hell. While Alex is getting stronger, and discovering things about herself that she never knew thanks to her mother being gone for the past 7 years, she has a tendency of acting as though she has a chip on her shoulder longer than the Brooklyn Bridge.

Can the team stop the villain before he ends up pushing Heaven and Hell into a supernatural apocalypse? Will Alex finally discover why she has a voice in her head, and what the other part of her heritage really is? Carlos the Tiger shifter vegetarian is an interesting character, but he's not used all that much. The conflict between Brendan and Alex is one that could have been wrapped up within the first 100 pages if one of them had said, I'm sorry. It's funny how much hurt can be smoothed over if two alleged adults say I'm sorry so that they can move on and not be stuck in the muck for most of the story.