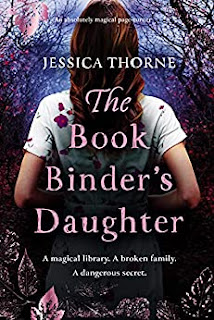 The song surrounded her now, the murmuring of the library insistent, and her foot took the first step on the winding stairs. She knew it wasn’t entirely a dream. It was the library calling her, its magic driving her.

When Sophie is offered a job at the Ayredale Library – the finest collection of rare books in the world, and the last place her bookbinder mother was seen when Sophie was just a teenager – she leaps at the chance. Will she finally discover what happened to the woman she’s always believed abandoned her?

Taking in the endless shelves of antique books, the soaring stained-glass windows, and the grand sweeping staircase, usually shy Sophie feels strangely at home, and is welcomed by her eccentric fellow binders. But why is the Keeper of the Library so reluctant to speak about Sophie’s mother? And why is Sophie the only person who can read the strange spells in the oldest books on display, written in a forgotten language nobody else understands?

The mysteries of the library only deepen when Sophie stumbles upon an elaborately carved door. The pattern exactly matches the pendant her mother left behind years ago, engraved with a delicate leaf. As the door swings open at her touch, Sophie gasps at the incredible sight: an enormous tree, impossibly growing higher than the library itself, its gently falling golden leaves somehow resembling the pages of a book. Amidst their rustling, Sophie hears a familiar whisper…

‘There you are, my Sophie. I knew you’d come back for me.’

Jessica Thorne's The Bookbinder's Daughter introduces readers to a magical library that holds all the secrets and mysteries of the world since the beginning of time. For hundreds of years, the Special Collection held a place at the heart of the library and archival world. The library is right up there with the Library of Alexandria and the Vatican SecretArchives for its mystical properties and secrecy. Sophie Lawrence works in the Conservation Department for the Academy in London. The Academy has always been Sophie's refuge from the world. Sophie works on rebinding, repairing, and restoring older books.

After bereavement leave after the loss of her father, she receives a visitor. The visitor is Head of Acquisitions at Ayredale's Special Collections who just happens to be her uncle Dr. Edward Talbot her mother's younger brother. For Sophie, the Special Collections is the place where she grew up and had a special connection to until 15 years ago when her mother disappeared, and her father took Sophie away which ended up with Sophie losing all memories of her past in the library. It's a frustrating thing not to know what happened 15 years ago, and why she has been having vivid memories of a mysterious tree which she apparently has a connection to.

So, when Edward offers her a position within the Special Connection as a conservator and specialist binder, how can she say no? Coming back to the library sparks Sophie’s memory and she begins to start remembering bits and pieces of what happened the day she lost her mother. She begins to remember that this library is not just an average library but a powerhouse for the world's history and creativity, and the staff are not just librarians but keepers and guardians of all the world’s knowledge and treasures. And so is the boy, Will Rhys, she left behind.

One of the most prevalent storylines in this book is Sophie's memory loss and her supposed Dyslexia. Despite being dyslexic, Sophie finds a particular book, the oldest book on display actually, and it is full of spells - spells that apparently only she can read. How is it that she cannot read even the simplest of things without difficulty but she can read these spells in what is most certainly a forgotten language?

Will Rhys is an assistant librarian as well as the guardian of the library. Sophie and Will grew up together. Will was heartbroken when her father took Sophie away. Now that she's back, the past needs to be revealed as well. What really happened the day 15 years ago when Elizabeth Talbot disappeared? Her family has been associated with the library since its creation many millennia before our story. Her romance blossoms with Will, though thankfully not in exquisite, sexual detail, and not so much that it takes from the story.

I personally thought the final chapters were the best in the entire book. I hated Sophie's alleged boyfriend who was a controlling butt head. He can't stand the thought of Sophia having a life, or a life without him controlling every aspect of her life. There are villains and there are good people. It's up to you to figure out who is who.