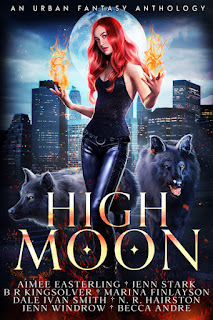 Come howl at the moon with these all-new tales of wolves in the city!

"Fox Hunt" by Aimee Easterling - Mai Fairchild's life revolves around acting human and teaching fencing to middleschoolers and protecting her sister Kira who is her only remaining relative. Then a student goes missing just as werewolves start breathing down her neck and fighting over who controls the city. One of them has intentions of making Mai his mate. Can she hunt the hunters without revealing her identity as a fox? Can she avoid being caught up in Werewolf politics? Can she save her sister from being used as a pawn? **This is a new to me author. This is a prequel to “Wolf’s Bane” (Moon Marked Series).

"Wereabouts Unknown" by Jenn Stark - Having strutted her way from cop to carny fortune teller to the newest, most fabulous member of a group of Tarot mystics, and Sara Wilde's best friend, Nikki Dawes has the world in the palms of her bedazzle-gloved hands. But now a pack of displaced werewolves is relying on her to find the rest of their kind who was left behind by the former Moon. Can she reunite those snarly, sexy beasts in time to win the war on magic? **I will literally gobble up anything this author writes no matter what name she writes under. There are some guest appearances like Aleksander Kreios, Simon the Fool, and Armaeus the Magician, as well as a brief appearance by Sara Wilde.

"Elemental Witch" by B R Kingsolver - After a magical disaster puts Joanna's future in jeopardy, the Supernatural Council gives her a second chance at Midleton College. She is basically an indentured servant until the Council feels that she's no longer a threat. New friends, a hot wolf shifter, and a serene campus grow on her fast. Then some fool summons a demon which starts on a killing spree. Can Joanna clean up the mess before the demon kills her friends? **This is another new to me author. I know the author has written other series, but I haven't found any information about Joanna or whether or not this is a one time introduction to a new character.

"Dragon Tears" by Marina Finlayson - New wolf Nat Turner jumps at the chance to escape her controlling pack when she's offered a job as bodyguard to a powerful dragon who is about to throw a party that all his enemies will appear. But her dream job becomes a nightmare when she realizes she must also protect the magical gems known as dragon tears that contain his power. Because holy hell, does that man have a lot of enemies. **This is also a new to me author and I have no further information whether Nat and Gabriel Arquette appear in any other of the authors works.

"Lunaticking" by Dale Ivan Smith - Sorcerer-Agent Elizabeth Marquez tracks illegal wolf-men manifestations while enforcing the magical laws that keep the hidden supernatural hidden. Shifter Chloe must find her kidnapped pack leader. Together, these two wielders of different magics must find the supernatural culprits behind both crimes, and stop a far greater one from happening. Elizabeth works for an organization called RUNE (Regulating Union of Normalizing Enchantments). Elizabeth and her partner Tully appear in the authors Agents of Sorcery series. She also appears in the anthology called Street Spells with the story called Silos.

"Prowl" by N. R. Hairston - Wereskunk Anise is constantly ducking werewolves and vampires intent upon harvesting her high-dollar skunk oil. Skunk oil can heal almost any injury as well as allowing vampires do day walk. She also works with other Skunks in rescuing those held by vampires who love to drain skunks of their precious oil. Everything seems to be coming to a head when Brick, an Alpha Werewolf, decides to take an interest in Anise and ensure that nobody takes what they're not entitled to. Will alpha werewolf Brick really help, or is he just another poacher hunting her? *Note* According to the author, Anise and Brick are the stars of an upcoming series

"Full Moon's Curse" by Jenn Windrow - Sometimes the cure is worse than the curse. Cursed by a witch on a power kick, Julia Monroe has twenty-four hours to kill the leader of the local coven named Kyoko Leno who just happens friends with her brother Julian. If she fails, she'll be forced to live as a wolf for the rest of her life. If she succeeds, she'll be excommunicated from her pack and her family. *There's a huge back story that needs to be linked to this story. Especially when characters like Alexis Black appear in the book. I've been told that if you want to know more about Alexis, then you need to read Evil's Unlikely Assassin.

"A Myth in Moonlight" by Becca Andre - Leena, who has the ability to manipulate moon light, knows that mythical creatures don't exist - not in the modern magical world. She knows that if you believe something to be true, then chances are that the thing you believe in will come to life like werewolves. But when the old werewolf myth proves to have some...bite, she must reexamine her beliefs to break an improbable curse before it runs wild in Cincinnati.**If you read this story and like it, the author suggests reading Final Formula series.