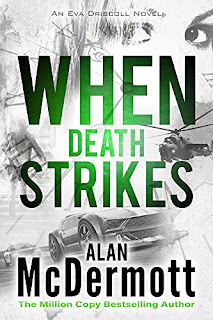 Eva Driscoll and Simon ‘Sonny’ Baines are living the good life. They have money and each other, but most importantly, their enemies think they are dead. Their new life is shattered when a bar room brawl thrusts them back into the spotlight, and they must evade a psychotic cartel boss and his skilled tracker if they are to survive. But those are not the only dangers they face. Eva and Sonny must battle their way through unforgiving landscapes, but just when they think they are safe, their world turns upside down once more. Tom Gray and his daughter, Melissa, are keeping their heads down in a small Canadian town. Life is good, if not a little boring, until Melissa is targeted by a school bully. That seemingly innocuous encounter leads the ESO to Gray, and this time there’s nowhere to run.

When Death Strikes is the fourth installment in author Alan McDermott's Eva Driscoll series. The story opens with Simon "Sonny" Baines and Eva Driscoll in Lima, Peru where they've been hopping between countries trying to remain in hiding and out of the limelight. Between the two of them, they've lost everyone they've known, while others are in hiding from their ESO (Executive Security Office) nemesis. ESO believes that the stunt that Eva pulled off in a previous novel actually worked and they are supposed to be dead along with Tom Grey. ESO controls the media, banks, law enforcement, and governments.

If they learn that Eva and Sonny are still alive, they will stop at nothing to terminate them on sight. Thanks to a man kidnapping Eva and leaving Sonny for dead, she finds herself in peril, and almost raped and disposed like other girls who have been taken. Sonny is forced to pull off a daring rescue attempt that sends the couple on a wild run for their lives. Unfortunately for the couple, Eva used Sonny's name and now everyone knows they are alive. Eva and Sonny must battle their way through unforgiving landscapes and skilled trackers, but just when they think they are safe, their world turns upside down once more.

Meanwhile in Canada, Tom Gray and his daughter, Melissa, are keeping their heads down in a small Canadian town and moving from town to town to avoid anyone knowing who he really is. Life is good, if not a little boring, until Melissa is targeted by a school bully and hits back. The father of the bully decides to hire a private investigator to dig up as much dirt as he can about about Gray. The encounter leads the ESO discovering that Gray, and his daughter are alive, and this time there's no where to run, or hide.

ESO wants Eva and Tom to do a job for them. If they do, they'll likely survive. If they don't Sonny and Melissa will pay the ultimate price since they will be held as hostages until the job is done. ESO is sick and tired of Felix Hernandez and wants him removed immediately. Felix has stymied ESO for years, and even slaughter a special ops team that tried to kill him. Joining Eva and Tom is Travis Burke, an ex-Seal Team member who is down on his luck, and running out of options to keep his business going. What better way to blackmail a person than to give them everything they need, but demand that they do jobs for ESO whenever the time arises.

There's a great deal of action and suspense in this book. It is apparent that the author intends to continue this series since he leaves a huge, and I mean, huge cliffhanger ending with massive implications for the future of Eva, Tom, Sonny, and even Melissa who is an innocent in all of this. Tom is getting up in years and it's time for him to retire and not continue the young man's game of running around the world doing whatever ESO tells him to do. It will be interesting to see how Eva and crew manages to survive the next challenges ahead of them.