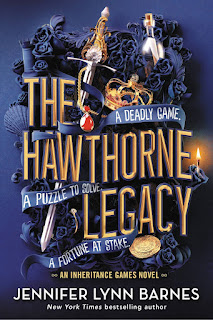 Intrigue, riches, and romance abound in this thrilling sequel to the beloved bestselling The Inheritance Games

The Inheritance Games ended with a bombshell, and now heiress Avery Grambs has to pick up the pieces and find the man who might hold the answers to all of her questions—including why Tobias Hawthorne left his entire fortune to Avery, a virtual stranger, rather than to his own daughters or grandsons.

Thanks to a DNA test, Avery knows that she’s not a Hawthorne by blood, but clues pile up hinting at a deeper connection to the family than she had ever imagined. As the mystery grows and the plot thickens, Grayson and Jameson, two of the enigmatic and magnetic Hawthorne grandsons, continue to pull Avery in different directions. And there are threats lurking around every corner, as adversaries emerge who will stop at nothing to see Avery out of the picture—by any means necessary.

The Hawthorne Legacy is the second installment in author Jennifer Lynn Barnes' The Inheritance Games. As Sherlock Holmes allegedly once said, "The games are afoot!" 3 weeks ago, Avery Grambs was scrapping by trying to survive High School and living in her car hoping she could find a scholarship and escape. Then she learned that she was heir to Texas billionaire and philanthropist Tobias Hawthorne which came with bodyguards, lawyers, and hatred aimed towards Avery.

Over the past few weeks, Avery, Jameson, Greyson, and Xavier Hawthorne have been roped into solving a mystery from the recently deceased Tobias who left each of them a piece of a larger puzzle. Even though older brother Nash has stepped aside, for the most part, he's still involved because of Avery's half sister Libby who has her own issues. Avery, who is not related to the Hawthorne's, must move into sprawling Hawthorne House, where every room bears the old man's touch--and his love of puzzles, riddles, secret passageways, hidden components, and codes.

The catch is that if she leaves before the year is up, she gets nothing. If she dies before the year is up, she gets nothing. She also has to deal with Jameson, Grayson, and Xavier who have decided that Avery isn't a conwoman, but someone who truly wants to do the right thing even if it means a twisted love triangle that develops. There's never a dull moment in Hawthorne House. It seems as though everyone has secrets, and everyone has an agenda, and everyone want something, even if it means getting in Avery's way at every turn.

With Rebecca Laughlin and Thea Calligans working with Xavier on a secretive plan, Avery makes a deal with both Grayson and Jameson to work together without stepping on each others toes. In an interesting twist, Avery's best friend Max arrives, and Avery tries to solve the secretive message her own mother left behind about the day she was born. One of the key mysteries of this book is whether or not Toby Hawthorne is still alive? This takes Avery on a journey of exploration, and danger, and apparently someone is desperate enough to put together scheme after scheme to stop her before she can reach her goals.

I've said this previously, but this book reminds me of Knives Out with twists, and shocks, and surprises. There's literally a cast of dozens who could either be villains or allies of Avery depending on what the situation is. The only person in this entire book Avery can trust is Max who I adore because she is just straight up fun and doesn't give a damn who she offends. As I was reading the final chapters, I was praying that Avery finds time to deal her own brand of payback to a whole cast of characters. I eagerly await the final chapter in this trilogy called The Final Gamble coming in 2022.