#Review - The Last Legacy by Adrienne Young #YA #Fantasy 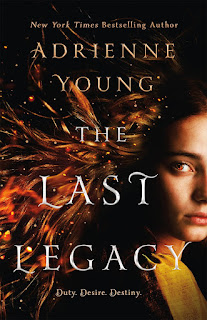 New York Times bestselling author Adrienne Young returns with The Last Legacy, a captivating standalone about family and blood ties, reinventing yourself, and controlling your own destiny.

When a letter from her uncle Henrik arrives on Bryn Roth's eighteenth birthday, summoning her back to Bastian, Bryn is eager to prove herself and finally take her place in her long-lost family.

Henrik has plans for Bryn, but she must win everyone’s trust if she wants to hold any power in the delicate architecture of the family. It doesn’t take long for her to see that the Roths are entangled in shadows. Despite their growing influence in upscale Bastian, their hands are still in the kind of dirty business that got Bryn’s parents killed years ago. With a forbidden romance to contend with and dangerous work ahead, the cost of being accepted into the Roths may be more than Bryn can pay.

The Last Legacy, by author Adrienne Young, is set in the same world as the authors Fable duology. In fact, the story takes place right after Namesake. For the past 14 years, Brynn Roth has been living with her great aunt Sariah learning to be the perfect lady while biding her time before she is called back to Bastian. On the day of her 18th birthday, Brynn receives a letter from her uncle Henrik Roth telling her it's time to come back home. Bastian is the largest, most influential city in the Unnamed Sea, but with the Narrows rising in influence, there's a shift happening.

Where Fable explored the trading crew aspect of the Narrows and Namesake explored more of the merchant and guild realm, The Last Legacy takes readers into the notorious home of the Roths, a crime family that has made its mark on both the Narrows and the Unnamed Sea with its fake gem trade. Bryn is unsure what her contribution to the Roth family legacy will be but she is willing to fight and sacrifice to make a place for herself. The only question is; is this criminal family worth fighting for, or, is the boy who is just as trapped as she is in this grimy world worth everything she can give-- including her legacy.

But as she spends more time learning the family trade, she discovers that they are tangled up in several shady secrets, lies, and deception, and they may have been responsible for Bryn's parents deaths 14 years ago. The Roth family is rough around the edges, even if they dress nicely and have money. Henrik wants Bryn to help the family gain a merchant ring and become guild members, so she gets a reputable tailor to make customers clothes for everyone and she teaches them etiquette and manners.

She also decides to try to reopen her mother's tea shop called Eden's Tea Shop where she is hoping to lure in the Merchant's Guild's best and gain her own freedom. She also has to find a way to save the boy she's fallen for Ezra, who was literally won by a dice game, and now is the most valuable asset of the Roth family. Her romance with Ezra was sweet, though I think it felt a bit rushed in some parts. Bryn must keep her wits at all times if she’s to outsmart her scheming uncle and the family business that wears itself like a chain around her neck.

If her tea shoppe venture is not successful, she’ll be allied to another wealthy merchant family through marriage. If it is, she may have found a way to make her own way and her own fate. Bryn is a girl who comes into her own throughout this story. She starts out doing and being what's expected of her by her uncle. She finds a way to be her own character, her own person, and I think Fable would be proud of all that she accomplishes. If you've read the Fable duology, you might remember Holland, and if you pay attention closely, the author gives you a very few hints of Fable and her crew in the story.